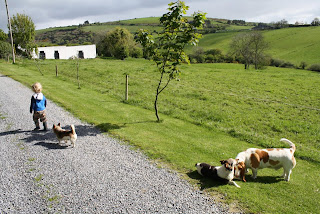 For those of you who don't know, craic (spelled wrong I'm sure) is an Irish term meaning something that doesn't easily translate to American English. I guess it's like something good, fun... Noel, pictured here with 3/5 dogs that we spent our time with in Ireland, would say the craic is good. Noel was in his glory. 10 days on a working farm with many animals and dangers. Many locks to be houdini-ed. Many dirty things to get all over his hands and clothes. I was so worried about the flight over and how he'd behave it never occurred to me that I should worry about the 240 hours we'd be there.

So yeah, the flight there? Piece of cake. Shocker, totally. Noel feel asleep as we took off and stayed that way for several hours. Eloise too. But then there was Abigail. The other 2 year old in our row. How do I know her name was Abigail? Because her mother said her name no less than 300 times. Abigail's seat. Abigail's juice. Oh Abigail. Abigail, stop that screaming. Ah Abigail. I never really counted on a different 2 year old being the cause of my flight annoyance. Well in fairness it was her mother.

So things that happened to Noel in Ireland: giant rock fell on his toe. Slipped in a pile of fresh cow poop. Grabbed and electric fence. Napped in a suitcase (open). Got stuck under a chair. Inspired cries of "where is Noel" 10X/day. Became obsessed with a yellow ball. As you can imagine, this was not a restful vacation for us. But it was great to see him have so much fun. Paudie was right there too. His cousins are all about soccer and it started to rub off on P, despite the fact that he makes up his own rules and is generally a poor loser. I think his cousins get a real laugh out of him because he's loud and bossy - typical yank. And a know it all. "Guys you want some chips? In America we call them FRENCH FRIES."

Eloise was her total princess self. I swear she didn't cry once the whole time we were gone. Slept great. She's such a joy.

So we did it. 3 small kids, 5 huge bags, 2 car seats, a stroller and 3 carry-ons. 6 hour flights and 3 hour drives from Dublin to Cork. No major illness or other issues. We ate lots of Irish meat and roulade. Even had us some Tim Hortons! Flying home I felt really accomplished despite the fact that Noel was in full tantrum mode. He was sitting with John in the row behind me and I just tried my best to tune him out.

This is probably like my tenth trip over and I never had jet lag. Well this time I had it for a week. Unreal how exhausted I was and Noel wouldn't sleep past 5 Am for days. Brutal zombie feeling. But a 3 day weekend helped. We celebrated Memorial Day by going to the Rochester parade and I remembered why that particular parade always sort of bothered me: elderly men wearing wool walking long distance in the heat. There were a few that CLEARLY should have been in an air conditioned vehicle waving. But no. So then I spent the whole parade worrying about them. Same reason I don't like to watch marathons.