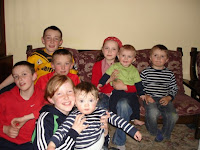 We are back from Ireland and it was a really wonderful trip. For the most part. It got off to a really rough start. Anytime you're on a plane, well over the Atlantic Ocean, and a voice comes on asking for any medical personnel to make themselves known to the crew, chances are a pitstop is in your future. In the case of flight EI 132, the pitstop was in Goose Bay Newfoundland, at 11:30 PM. Paudie was soundly asleep when the plane landed and craziness ensued - the electrical hook-up wasn't working, the door (which we were sitting next to) had to be open for refueling (and it was arctic)... when we took off again at 1:00 AM, Paudie lost it all together. For an hour. Of screaming. Inconsolable screaming. We now refer to it as the ' Goose Bay Breakdown.' I almost lost it myself -but thankfully John got him to sleep with some heavy duty rocking. Our bad luck continued when we learned we couldn't land in Shannon but had to go to Dublin where more ridiculousness ensued (everyone off the plane! everyone back on the plane!). Anyhoo we finally landed 7 hours late and except for the GBB, Paudie was his totally awesome self.

I wish I could count how many relatives Paudie met last week. Countless. Check him and a handful of his cousins out above. His charm was in full effect. He also picked up some fab new party tricks - sticking out his tongue and making a clicky noise with it. He's waaaay more grabby than he was prior to us leaving. It's actually quite annoying, but I get it, he's just exploring his world. Testing out some things. It's just disturbing to see multiple strands of my hair stuck to his sweaty palms. Or to see him stick his index finger in a perfect stranger's mouth (who didn't seem to mind), and then watch it go into his own. God, the germs he was exposed to. I can't believe he stayed healthy the whole week. I guess that in itself is a small victory.

It was hard to come back. Ireland is beautiful, John's family very kind. Plus it was just the best to be able to spend so much time with the little guy. It's like I miss him in ways I didn't before. Cos I feel like I know him so much better than before. Sigh.
Posted by paudie's ma at 4:25 PM No comments:

the green green grass of home 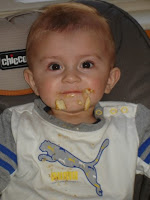 Tomorrow is the day that we take Paudie to Ireland to meet his nana, several aunts and uncles, 10 cousins and countless extended relatives. Not to mention 3 dogs, a bunch of cows, and the occasional neighbor or schoolmate. I am both excited for this trip, and anxious. Not only has this whole week been a flashback to Cian's diagnosis as he was one-day away from his trip to Ireland when the cancer was discovered (how fortuitous that his packed bag just went to the hospital instead of the airport), then there is the matter of Paudie outliving Cian as of Monday the 14th (and throw in the 4th anniversary of John's father's death tomorrow). What does it all come back to - bittersweetness.
As you can see by the pic, Paudie digs biscuits. This is one way that he is very much like his parents. It's amazing how the child gags on like everything - but the first time he had a biscuit - no gags. He likes him some biscuits. And damn, they are messy.
Tomorrow is going to be a long day. We get to the airport in Boston at 5:00 - will get to John's mother's house in West Cork at about 10:00 AM (or 5:00 AM our time) - that's a lot of travelling. And I'm working all day of course. Our first day in Ireland is always very zombie-like, for me anyways. I could never have been a doctor as I seriously don't function without sleep. Or rather I am seriously dysfunctional.
Wish us luck. I am sure I will have anecdotes and photos to post once we return. Hoepfully we will come back to true spring. Child has cabin fever for sure.
Posted by paudie's ma at 10:32 AM No comments: 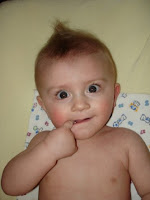 Paudie is almost 7 months now and his development is rapid and ridiculously amazing. He is starting to babble with syllables - a ba here, a ma there - and it is glorious. Not to mention watching his motor skills advance. Last night he stuck his butt up in the air for the first time - the boy wants to be crawling. For about 30 minutes he just rolled back and forth and attempted to get onto all fours. Not only is all of this so fun to experience really for the first time - but for us, it's like - 'we're doing it. we're getting there. he's going to make it.' things are as they should be (with Paudie that is - not in the global sense of our lives). I actually find myself looking towards September and his first birthday. For six months I wouldn't let myself have any future orientation. I still have a ways to go, but I'm getting there.

Paudie still challenges us with eating, though we have discovered he loves mashed banana and had his first piece of liga biscuit last night, which he devoured with only minor gagging. Hopefully we will make the cross-over to mostly food/few bottles at some point during the summer. I swear if it were up to him he'd just get by on raw energy and adrenaline. There is no fat on this kid.

I am making progress losing the baby weight - it's coming off slowly due to a lifestyle change - reducing carbs and sugar. The tummy flab is sticking with me for good though - man the flab can be deceiving. Standing up straight it is invisible but bend over and bam, hello roll. And I suppose if we have another, it's only going to get worse. So cruel.