I was told that at least two times this week, perhaps three. And then there were the times I was blocking the TV or sitting in the spot Paudie wanted to sit. I can't believe two year olds can already sass their parents. It seems like it went from him barely being able to talk to talking to me like I talked my mom for a good 20 years in about no time at at all. So unfair. Where is the unconditional love and cuddling and neediness I ask you?

Big hit last weekend with the boys haircuts. Banjo spent hours being groomed and is like Westminster material, if only he weren't a halfbred southern mutt. And Paudie made it through his cut without a single tear! Even sat in the chair by himself. There were some tense moments, particularly when the razor came out. I have to say, I think we are done with Snip-Its now. The woman who cut us had less than zero charm and personality. Asked me how much I wanted taken off, I said not much/I liked it a little longish... she then proceeded to cut the cast majority of his hair off. Thanks. I think it has been a long time since I met someone working in a service industry who clearly hates her job as much as this charmer. The only reason I rolled with it was that I figured well, at least he won't need another cut for a long time. But he's got way too serious of a look going for my liking.

Since daycare was closed yesterday, John took Paudie to the aquarium. The real aquarium not the New Bedford sham. John has wanted to take him there since the kid was like just able to walk. He was all pumped up. Unfortunately, Paudie hated the crowds, was scared of the fish and only wanted to climb on things he wasn't necessarily supposed to climb on. So it was sort of a let down for John I think. Paudie was so excited the night before and the morning of - and he loves animals - but he just wasn't feeling it I guess. I spent 30 minutes on the phone trying to register him for swimming class this AM and all I could think is, good god I hope this isn't like the aquarium experience. He says he wants to swim, pretends to be a dolphin all the time... is excited about the notion of swimming when I mention it... so we'll see. I think it will be good. John will have to take him though since I think I still gag at the smell of indoor pool chlorine. That reflex is what ended my professional swimming career at a very young age.

Can you believe on Sunday February is over? The most hated month of the year behind us. Hurrah! I have to say though, it was pretty damn tolerable this year. Now we just need to get over the March 7 hump. I hate that's how I feel about Cian's birthday, but anniversaries just loom... almost mocking you. Anticipation can be evil.
Posted by paudie's ma at 3:20 PM No comments: 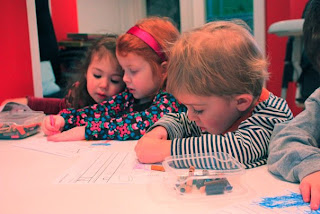 So this is the photo that was featured on TV last night, on Chronicle from the Day in the Life series. Sure the credits were running over it, but that's okay. And yeah we watched Chronicle till 7:50 waiting for it and then turned the channel to Diego so Paudie would get his PJs on so we missed it. And there we were telling him all night he'd be on TV. Sigh.
We haven't taken pics of him in so long. I'll chalk it up to the winter blahs. Maybe we'll get some tomorrow afterall it is "boys haircut day" where all three boys are getting groomed - that is how we are selling it to him. I don't know who will be a more difficult client, Paudie or the dog. But they both need some clean up. I know Paudie is going to balk but we'll just ply him with sugar and hopefully that will soothe him.
So earlier this week we had a two-day run of a hungry boy. It was amazing to see him really eat and to hear him saying that he is hungry and actually wants to eat. But like I said, seems to have been a two-day phase. Drat. I had thought we turned the corner but I guess he was just teasing. We did learn recently that he "loves sushi" (his words) so that's been kind of fun - we get rice and rolls once a week now and he does pretty well with that meal.
Trying to think what else has happened since the last post... Paudie had a great Valentine's day. Lots of chocolate so he was a happy camper. And his mom was too. Last Saturday John took him to a music program at the library and I guess he did pretty well with that - a little standoffish but he eventually got his groove. I'm sure it will be like another year before he goes back to the library because once the weather warms up the homeless people start to sleep there.
Obviously life is pretty mundane right now. Things are quiet, which is good. Paudie continues to enjoy Banjo and continues to get more verbal. This week's gems were "Leave me alone" and "Don't you tickle me... EVER." He loves to throw EVER onto the end of sentences all angry like for effect. He is still sleeping in bigboy bed most nights, though he has little command of head on pillow. I wonder when that will kick in. Every morning I check on him and he is in some new convoluted position. And have I mentioned he is still teething? He's 2 and a half and is missing teeth - and we don't even know if there are teeth coming or if he inherited my dental issues (too many teeth here, not enough there).
In other news, March is coming and you know what that means... I think we might do a small birthday cake for Cian this year to try to involve Paudie more in celebrating his life. Hopefully I won't be bawling my eyes out singing to him... but I probably will be. Hormones.
Posted by paudie's ma at 2:43 PM No comments: 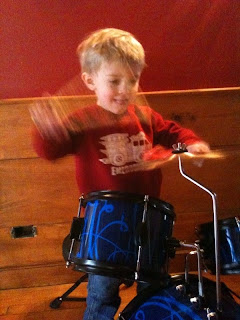 Thank goodness for my iPhone or there would be no new pics of Paudie in a long time. We areally are slipping these days! Look at him banging away on his cousin's drumset. He looks like a natural. I think he could be some sort of rockstar, he does have a renaissance toddler vibe going for him. Likes music, dance, cooking, reading, dirt, animals, soccer. You name it. Everything but haircuts, the doctor and most meat except sausage.

Today's title refers to a funny, back-page of Parent's Magazine, thing Paudie said the other day. We were in the car and John turned the wrong way down a one way street and Paudie asked where we were going and John said he had to turn around since he was breaking the law and Paudie suggested he could fix the law. Cute.

So the boy is healthy again. I think he lost a pound or two as all his pants are low rider at the moment. But being his grandmother's grandson, he does still complain that they are too tight. At least he isn't asking for a hanky every ten minutes.

The last few weeks have been pretty good. The mornings are going pretty smoothe. We have learned how to use TV properly as the bribe. Give him a little then threaten to turn it off if clothes are not changed in a timely manner. Works in the AM and PM. About two weeks ago Paudie woke up one morning and had a hankering for the Muppets. Demanding to see them. Well we had none. So to the mall we went and grabbed a few of their movies. My god, for a week straight it's all he wanted to watch. Asking for the Muppets constantly. When we put on a movie, he goes into a trance and cannot be disturbed. He says Animal is his favorite but he seems to like Fozzie as well. Me, I still have my Rolph the dog ceramic mug from 1981. No idea if I really liked Rolph or what the deal was there cos he isn't really doing it for me right now. But man who didn't looooove the Muppet Show? That was such good stuff. I have to say what has surprised me abotu the movies, particularly the original, is the violence. It is rated G and there is a lot of gunfire and talk of killing Kermit. Even the main plot - frog legs - is kind of morose. Man I miss the 70s. Everything is so sterile these days but I guess it has to be. Wah.

Hmmm what else is going on? I can't even remember what we did over the weekend. Oh right, nothing on Saturday. Paudie's cousins came over and were playing with all of his toys and all he could do was run from one to the next supervising. It took him awhile to settle in and be okay with them touching his things. Was really the first time in a long time we had other kids over touching his stuff. Funny to see him so anxious. Sunday we went down to New Bedford to what John kept calling an aquarium. A large room with 7 small fish tanks isn't an aquarium. But honestly it was perfect for him. Lots of wet things and fish to look at and toys to play with. We can cross if off our list. We stopped at an antique mart on the way back and Paudie had a ball running around, calling out all the things he was seeing and nearly breaking many other things. I felt like the people working there were following us around just waiting for something to break. I love how we can take him anywhere, but the doctor or for a haircut, and he can have a ball. Why can't I be him?
Posted by paudie's ma at 11:33 AM No comments: