Can you feel the love? 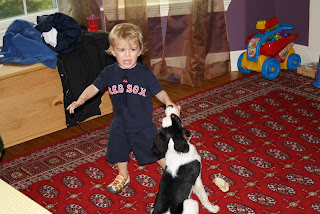 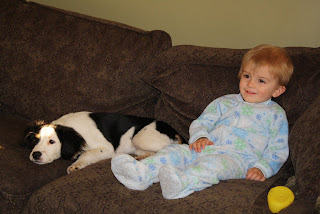 Paudie is still adjusting to Banjo. The love-hate is still ongoing. Banjo is still pooping in only 3 places - our house, our car, or a one-square foot area of flower bed in our backyard. Clearly, much work to be done. The biting and chewing and nipping are showing no signs of alleviating, but I am getting decent exercise from the amount of times I have to get up from a seated position to retrieve something from Banjo's mouth that really shouldn't be there. This week I actually wa successful in forcing him to spit his own poop out (this was outdoors at least).

Paudie is a trooper. I think he and Banjo will be great friends. Someday.
Hard to believe our boy is going to be 21 months old next week. His language is coming fast now - even Wendy comments on how he is doing a great job stringing words together. Of course I have no examples of this at the moment. He still refuses to say yes or nod his head, and he still prefers to keep the presence of poop in his diaper to himself - though the smell continues to betray him. He continues to be fascinated by water - turning on taps, playing in the dog's water - last week he darted into the ocean down at Wollaston Beach - gave us a scare. And John very wet pants and shoes.
On Sunday we went to New Balance and Pau was on fire - screeching, running around the store, saying hi to people. One elderly man commented on him being very social. By the end of our trip, he noted that we seemed to have our hands full. What does thay say about us, or rather me since John was shopping and I was in charge of wrangling? I mean, he is only one kid. You think I can't handle that? heee. I totally can't! To pass the time I tried the most awesome pair of Elmo NB sneakers on Pau and angsted over if they were worth $30 or not. It's crazy - you have a kid and it's all about their fashion and looks and meanwhile you're wearing aging flip flops and scrapped up clothes. I passed on the sneakers - we had just bought two pairs the day before and John was mortified I was seriously considering a third.
Here's hoping the New England weather turns soon - this week has been cold and wet and depressing and not conducive to burning off toddler energy. Very conducive to conserving my energy though so there is the tradeoff.
Posted by paudie's ma at 12:29 PM No comments:

Wow, almost a month since my last post. Where does the time go?

Really the last few weeks have been consumed by the newest addition to our family, a 5-month old beagle/springer spaniel (or a springle - yeah I made that up) pup named Banjo. We had been casually talking about getting a dog for Paudie since he is so crazy for them and we liked the looks of springer spaniels. Saw Banjo on Petfinder - he was in Alabama but being adopted to the New England area via a group in Maine. I filled out the app more or less on a whim... then BAM, Banjo is ours. Actually, his name had been Connor - when we asked Pau what he wanted to name is doggie, he said something very close to Banjo - which is a fitting southern boy name.

So Pau and Banjo have an interesting, love hate relationship. Banjo is a very bitey, chewey dog. He especially loves to nibble on Paudie and boy, can those teeth hurt sometimes. So there have been tears between the nipping and the occasional knockdown. I feel as if we are going through the baby proofing process all over again as newspapers, cups, clothes, shoes... all these things we were finally able to sort of leave out at will all are being placed out of reach again. In fact, our house is starting to look like a couple of minimalists live there.

Banjo's presence is having some interesting effects on Pau though - in a good way - so no, it's not all tears. For the first few days, Pau definitely had issues with his alpha status in our house. He was shocked to see his parents tripping over themselves to pay attention to someone else - even if it was all screeching not to pee or poop under the radiator. So in the beginning there was some cute sort of acting out - look at me mom! In the past week, that has translated into more verbal communication. It's very cute. He continues to say hi and bye to anyone who will look his way - including neighbors we have never spoken to in our lives, a gas station attendant and a creepy man wearing a wife beater and sweeping the sidewalk in Arlington. His speech is also getting clearer.

Beyond Banjo, not much else going on at our house. That is enough. I really wish I were a heartier person that could take on more than a toddler and a puppy but sorry to say, that ain't me right now. The bar is very low. I sometimes feel like I am elderly. Like I look back on things I did even a few years ago - travel for work as one example, and am all, oh the things I used to do, the places I have been. I hate it. Why can't my constitution pick up a bit? I am hopeful that summer will bring out more energy and that perhaps I'm just in the dumps from the cool spring weather.

Have some nice shots of the boy and the dog, will attempt to post soon. But you know I can't really do more than like one thing a day right now. Maybe I should look into coke.
Posted by paudie's ma at 1:45 PM 1 comment: