My dad once told me, 'the older you are, the faster it goes.' It's hard to imagine time goes any faster than it is right now. It's also hard to believe that I'm looking 40 in the face. 40. When did that happen? I wish I could say that the three kids here are keeping me young and spry but the reality is I'm tired and cranky much of the time. In other ways I really don't feel older than let's say... 34. Mentally I feel about 16. The other night John and I were doing the math on Eloise. So when she's 21 we'll be... 60. My mom had me at 34 and in the 70's that was, you know, a change of age baby. So I grew up feeling like my parents were senior citizens because everyone else I knew had parents in their 30s. I used to cry and tell my mom, "I don't want you to die," and I'd say she was about 44 when I was having that anxiety. Oy.

Another quote about age that I like is, "you're as old as you've been but as young as you're going to be." I am trying to embrace my age and I am trying to take better care of myself so that I'm healthy for the kids - I will perservere over some pretty unfortunate DNA. For the past seven years I have been in some state of trying to get pregnant/pregnant/post-partum/nursing/grieving so it's been pretty easy to push aside my physical health. But now that I know we are done having kids, I know I need to get off my arse. I started back to the gym a few weeks ago and almost collapsed doing about 10 minutes of cardio. Shameful. But I'm sticking with it. Do it for the kids, that's my motto.

Speaking of the passage of time, Eloise is now 5 months. My three faithful readers will know that Cian was 5 months when he was diagnosed with cancer, seemingly out of the blue. So we did our usual 'peace of mind' belly scan this week for her. Nervewracking as always. I was telling John, I know we did this with Noel but I can't even remember. I guess my mind has decided to block that memory. So Eloise got the all clear. I was fairly certain she would - how is that for me getting lulled into a false sense of security? Eloise probably looks the most like Cian without the stunning blue eyes. But she's so different - she's the mellowest kid. Though Noel was a mellow kid and now he's super nanny material so who knows. She finally rolled over yesterday onto her tummy. Definitely our latest roller.

In a few weeks we will all get onto an airplane bound for Ireland. Or forced to make an emergency landing in Goose Bay Canada to have an unruly two year old and his family removed from the plane. I have so much anxiety about flying with Noel. Maybe part of me thinks if I really build it up and have all these worst case scenarios in my mind it will turn out to be really easy then I'll laugh at all of my angst. I so hope that is the case. We don't even take this kid to the store very often but we're going to try and buckle him into a seat for many hours. Hmmm. He hates TV so that will probaby not be a good distraction. He does like candy so that will be one strategy. Lots of fresh air before the flight, another strategy. Let's just hope he doesn't poop on the plane because that's a toxic situation compounded by his violent hatred of diaper changes. Normally when we are weeks out from this trip to see John's family I am well into the planning and packing - not this time. I can't mentally deal just yet - but it's happening so I better accept it. Today we got a notice from the airline so kindly offering us a business class upgrade for the mere cost of $655 per ticket. We wondered if they'd take Noel. He'd liven the place up. Stiffs. 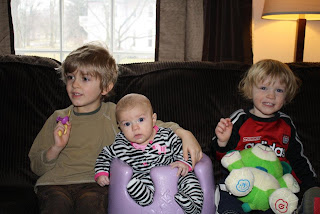 I've often heard tales of cold and flu seasons that beat families with small children into submission but had yet to experience this firsthand until last month. I knew we'd been lucky all these years but didn't realize how lucky until I experienced this cycle of illness myself. Wow. Sure the kids look happy there don't they? This must have been taken the one day last month when someone wasn't sick. We have been at the pediatrician's office on a weekly basis since February 18. We've had head colds, a staph infection, a viral/respiratory thang, stomach flu and pink eye. It's that little blonde thing on the right - he is the vector. And that cutie in the middle - she's like the magnet. Paudie just sort of squeaks by.

So yeah, germs. I started the month with a sinus infection and ended it with the stomach flu. Anyone that knows me well knows I am not a barfer. So any type of flu is makes me especially pathetic since I am completely unable to rid myself of the ick feeling. Luckily this did not set in until just after Paudie's Kindergarten screening. He was so excited to go last week. He bounced out of bed and then was angsting all morning about time - not being late. He did a great job and it was so fun to observe him interacting with teachers. I was the same way - so ready for Kindergarten. Bring on the learning!

The other big event around here was Noel turning 2 on Sunday. He is really making progress - no more bottle and no more crib. I really had my doubts about his ability to stay in bed, but he's been doing a pretty good job. He now has about 35 words in his vocabulary too, so that's finally starting to come along. Mind you he still likes to throw down a couple times a day and he still can drive our dog absolutely out of his mind with the pitch of his cry. You really gotta hear Banjo when Noel cries or whines. He sits up and starts howling at the top of his lungs - snout pointed straight in the air. Ow-ow-ow-owowwwwwwww. It'll make your ears practically bleed.

Eloise is now 4.5 months old and still a little darling. Seems to have a lot of Paudie traits - refuses to roll over, can bend into any shape to be able to view the TV. Need to get her going on food but like Paudie, not really into it. Tried cereal, tried peaches - blech.

Wow this is boring. I guess boring could be a good thing, right? I basically go to bed every night and say thanks to whomever for the boring-ness of our lives with the children. Sure I wish we were traveling the world and finding all these life experiences for the kids, but frankly I'm just so happy they are here and as far as we know at 12:26 PM on April 3rd, healthy. The bar is low my friends, the bar is low.
Posted by paudie's ma at 12:06 PM No comments: