Was what we had last night - yes, for the 3rd time in 2 years, John and I had a night out. Okay so 90 minutes out. It was our 5 year anniversary and for the past four years we have largely ignored it and laid low, but given we now have a proven/neighborhood resource for childminding, we decided dinner was in order. Paudie barely batted an eye when we left - from the front yard I tried to peer through the curtains to make sure he was okay but couldn't see a thing. Note to self: leave curtains open a bit next time. We went to a restaurant about 5 mins from our house and try as we could to extend our night out, we were home 75 minutes later. Baby steps I guess - this time two hours, next time three. But I have to say, I now know a lot more about my husband's current job. Amazing what quiet/focused time can do for information gathering.

Last Sunday we took Paudie to a memorial service for the kids that died at Children's from cancer. We went two years ago but even though I knew what to expect - god I was a mess. An utter mess. Paudie wasn't having any of the service so John had to take him out - and there I sat alone, bawling. Hysterically. I didn't see anyone else as messy as I was - but man, the heartbreak in the room was effing palpable. Cian was one of only three babies remembered that day - really striking as to how little life he got to experience. And now this weekend we have a service for organ donors - the quilt his square is on is being displayed. So another messy afternoon I am sure - but that's what October is really about anyways for us I guess. There is definitely an element of catharsis to these events - really reflecting on what happened, why, where we are now - and is it where we want to be. That is the $50, 000 question.

And in all of this Paudie remains oblivious. The clinical staff that knew us at last week's event were thrilled to meet him - genuinely happy for us. But he doesn't have a clue. I think he thinks pics of Cian are pics of him. I often wonder what he'll do in school when he is asked to draw a picture of his family. I hope he includes Cian.

Onto lighter topics - Paudie is going as a spider this year for halloween. Well, that is the costume I have for him, it remains to be seen if he really wears it. It isn't a creepy spider, but you never know with this kid what is going to spook him. While he has interest in pumpkins, store halloween displays make him cling to his dad. I am contemplating carving a pumpkin this year - we painted a small one last weekend, but I think he could be really pumped for the carving experience. It's been ages since I carved. Hmmm. I know if I do, it will turn into a thing. And toddlers and sharp implements don't mix well. Do they still sell those safety carving knives I wonder? Though I really do want to kick it old school with the kitchen knife like Barb DeLee would.
Posted by paudie's ma at 1:30 PM No comments:

more of that bittersweetness 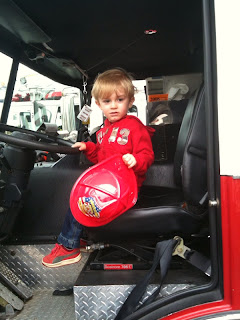 Had a fine time with my family in upstate NY last week. We took in the Applefest - a claim to fame of my hometown - though it was crawling with people and bees. It was a quick visit and reminiscence. We also spent time with my mom at the nursing home where she won over Paudie with the likings of pretzels, crackers and cookies. And some broccoli. He gets that from his dad. Also went to a petting zoo where he squealed like a little girl at the site of goats and chickens, that he lovingly referred to as 'chicken nuggets.' Also got to visit a firehouse near my sister's place. He talked about the fire trucks all afternoon then when we got there - deer in headlights. Spent most of the time marveling at the small bus they had - I guess to transport firemen? Finally towards the end of the event we coaxed him onto the pumper and the above pic is what we got. Good stuff all around. The time always goes so fast when we are there but it tends to be very relaxing for me to be 'at home' and I so enjoy watching Pau and my family interact with each other.
Have to say he was a trooper for the 7-hour ride home. In great spirits the whole entire time. Perhaps he was making up for the 90 minutes of screaming on the way there, in the midst of really lousy, rainy weather on the very dark Thruway.
Since we didn't get around to getting a pumpkin in NY, due to the worst meltdown in Paudie's 2 year history as it was time to leave the petting zoo (he put Goose bay to shame), we found a fun little patch here and went on Saturday. They give you your own little red wagon to haul out into the field to wheel back your goods in. Paudie was all about trying to carry the pumpkins. He really does seem to enjoy moving and lifting things. Nothing makes his eyes light up like the notion that something may be too heavy for one person to carry. As we were leaving the farm he saw the hayride go by and was bawling his eyes out for 'tracka.' I made John go back, there I said it. I don't know - are we spoiling him by not setting boundaries? I don't think so. I feel like it is a tease to let a boy who looooves tractors see one go by with the $1 opportunity to hop on and not take advantage. It's not like we were avoiding it, it just never went near us the whole time we were there. As I was waiting in the car for the boys to come back I heard another mom say to he husband, let's get out of here before he (small boy) sees the hayride and that made me think - am I a softy? I guess yeah, I am.
Speaking of farms, Paudie is at another today with his cousins having what John says is yet again, the time of his life. Ugh, I'm so jealous! I want to have the time of my life nearly every day!
So it wouldn't be me on October 12th if I didn't take the time to point out that tomorrow is the 3 year anniversary of Cian's death. Three years. That means he has been gone about 6 times the amount of time he was with us. As you can imagine, that means memories of him are getting harder to hang on to, particularly because newborns aren't exactly creating indelible memories for their parents left and right. It's so hard. I miss him so much. But as I have said before, in some ways his passing was easier for me to grasp than his diagnosis. And it's not because I'm some overly religious type who thinks, 'oh now he is at home with Jesus.' Yeah, I know that works for some bereaved parents and I have no problem with that - but it doesn't work for me. All I know is that he was suffering dearly those last few days and all I could say is, give me a lifetime of pain and sadness to take away his. So that's what happened. The trauma was his diagnosis. The leap from thinking you have a perfectly healthy baby that is going to give you a lifetime of happiness (which in some ways, he did) to one that is terminally ill is much greater than the leap to death.
In all of this there is Paudie. Paudie who when he was mere ounces and centimeters pulled me up and out of bed every day. Paudie who when he says, 'bye mommy' to me every morning eradicates a fear that I once had of never being called that. Paudie is here because Cian is not. Not that we didn't want to have other children, the plan was always to wait till Cian was a year old before taking any of those steps. But we revised that plan and were given the most tremendous gift. Not that we didn't deserve it, but I'm not naive. Losing one child doesn't automatically qualify you for another - though it should.
I always feel much better when I wake up on Oct 13 as opposed to Oct 12. At least then it is here. And you face it head on. Enough of the anticipation.
Posted by paudie's ma at 2:28 PM No comments: