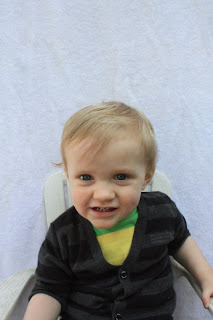 Ugh it's like almost the end of May. For the love of god, where does the time go. The last few weeks at work have been crazy. I feel like I never even get the chance to get outside for fresh air these days which I guess is fine since it's mostly raining out all the time anyways. But it's hard to be so busy all day - mainly lots of meetings which if you knew me better than my occasional musings on this blog you'd know I generally don't like to focibly interact with people. By the time I get home I feel so spent - who doesn't though. Whine whine whine. Make it stop!

Yeah so life is busy. Busy here, busy there. But kids are great. Noel is such a little scoundrel! He's also s sweet boy who loves to hug and literally does a little dance in his crib every morning when I open his door. He and Banjo are the morning people of our house. The rest of us? Brutal. I so fondly remember sleeping in until 12 or 1 in my teens and twenties. Agh, good times. Now I awake at 5:45 for no other reason than to think about to-do items. Grim. I don't know what would be more pathetic to 20 year old me, the fact that I get up at 6 even though I don't really have to, or the fact that I go to bed at 9:30 cos I can't stay awake past then. I would totally fit in at a retirement village - that's a lifestyle I could get on board with.

Paudie has been challenging us lately. Noel physically challenges us. He is still obsessed with our bathroom which has a pocket door on it that he can now easily open. And like his brother before him, it's really fun to put things in the toilet. This week: a cup and a spoon. The spoon then made it's way into th eclean utensil tray in the dishwasher. Conamination! The garbage can has also been moved since it's also just as fun to put non-trash items in there. He just doesn't stop and has Jason Bourne like intuition and skills. He'll be completely engrossed in a bottle laying down and it will occur to him that minutes earlier he didn't hear the stairway gate click shut. He will expolit your every exhaustion induced oversight.

Oh, sorry, I forgot it was Paudie I was about to whine about. Paudie. Can anyone out there help me understand pre-school little boys and how their minds work? He has a penchant for grossness. Licking his feet after we take off his grody socks, licking food off the kitchen table. Then there is the awful humor. Like he puts the word 'stinky' in front of nouns on a pretty frequent basis and cracks himself up. And he's insanely jealous of his little brother who he feels gets away with a lot more than he does. True enough. This isn't to say I don't love him dearly because for all his behaviors that I don't get or I'm aching to modify, there is the sweet little boy who came to the eye doctor with me this week to check out the machines and was as good as could be. A lot of people tell me it gets easier when they turn 4 so we'll see. It's just so hard when you know you have an amazing, bright kid on your hands but you only get to see that person for pieces at a time, on his own terms.

I really hope the sun finds its way to the east coast because there are a lot of us that would really, really, really like to leave our house. I think Banjo is going mental. 6 months is a long time to be basically stuck indoors. I actually spend energy fretting that the entire summer is going to be cool and rainy. My seasonal affective disorder can't take it much longer. I'm going to get scurvy. There now you know the only fact I have retained from middle school health class.

Oh, and if the rapture really is tomorrow, we're convinced our dog will eat us. Starting with John.
Posted by paudie's ma at 1:05 PM No comments: