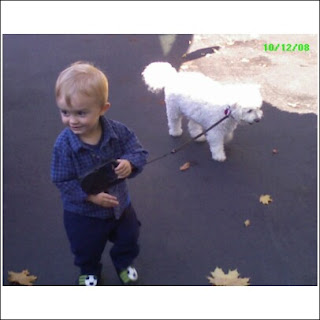 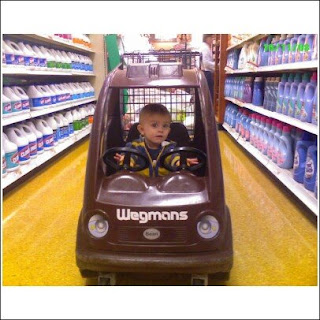 Life is funny. So my last posting I'm all sad about missing Paudie, the daycare situation and the impending two-year anniversary. Well, little did I know that only days after posting I'd be thrown back into medical crisis mode. My father had his foot amputated Friday morning (and for anyone reading this, my mother does not know the extent of the surgery - we will tell her at some point soon). What started out as an infection on his little toe which was initally amputated Sunday started to spread and by Thursday it was a life or death situation. So off to Rochester we were on Friday. Not where I wanted to be for the anniversary and not the circumstances I wanted to be managing. But such is life. We came back yesterday and I am exhausted on every level. The weather was amazing, and we got to eat lots of apples and appley things, in addition to Schalers, DiBellas, Pontillios and a Wegmans trip or two. We tried to make the most of it, but it was hard. Paudie was absolutely out of control. 4 days in a non-baby proof environment was almost more than he could handle. His favorite moments: stealing my mom's cane, over and over, as well as her $3 Walmart clock that she is obsessed with. He played well with Lucy, and enjoyed walking her. He also enjoyed spilling her water dish no more than 15 times. I thought I'd lose my mind by last night. Between trips to the hospital, chasing him, dealing with my mother... It was a lot. But I'm glad we went and that my dad got to see Paudie, I hope our visit lifted his very down spirits some. As for me, I couldn't even attend to Cian's anniversary which is hard thing to admit, but it's the truth. It's like on Cian's first birthday, I spent two days in the hospital for gallstones, at pain level 10 for most of it. I think he forgives me.
Times like these make me really appreciate the drama free days that feel like nothing and blah. Like today. I am sitting at work and it is just quiet. Almost peaceful.
I wonder how Paudie is doing back at daycare. He was not a happy camper when I dropped him today. I think it is going to take a few days for him to get back into his routine.