what you talking about willis? 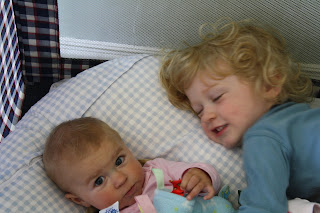 Doesn't Eloise totally have that Arnold look on her face? There she was, just chillaxing in her little play yard when Noel decided to climb on in and join her. He looooooves his little sister. Every morning she wakes up at about 6 and cries until I bring her into our bed. She falls right back asleep until the other two arrive in at about 7:30. For a few minutes it's just the sweetest thing, all of us resting in our bed together, until Noel and P start to fight. Then we have to swoop in and retrieve Miss Ellie Jo. I know they say the more of routine the less of life, but I sort of like knowing what to expect every morning.

So we had John's family in town for a few days and boy did we show em a Western NY good time. We ran them ragged. Hit the County Fair one late afternoon. I love how it goes from all sweet and 4-H like with the animals and the farming kids to all gross in a matter of about an hour. The clientele goes downhill fast. I love how kids don't even notice, it's just all about the rides. Hit Niagara Falls Canada the next day - my first time over the border since I was probably 20. In other words, underage and looking to drink. Man the US side is depressing. Talk about a missed opportunity for tourism - it is literally all boarded up shops and houses. But then Canada is all clean and green with activities galore. We did the Maid of the Mist - my first time. Wow. It was about 93 out and we are all struggling with the heat so the mist off the falls was so refreshing. Paudie and Ellie loved it - Noel, who is usually the risk taker, not so much. He never ceases to surprise up. We hit a Civil War re-enactment on Saturday. Wow again. Man people get really into that! The soldiers were like, the real deal. It's as if they just stepped out of 1861. No plastic bottles or soda or preserved snacks. And the calvary was pretty cool too. Later that night we dragged ourselves to a Drive-in since that seemed to have the Irish cousins pretty intrigued. But everyone either fell asleep or melted down within about 15 minutes of the movie starting. I'm so glad we have one of those close by - such a great idea. Nothing like being outside on a nice mild, breezy night and having large screen entertainment right there.

Sunday things came to a halt because my father had to go into the hospital. These past few months my position as a sandwich kid or whatever the hell the nickname is for people taking care of children and parents has really started to wear me down. To have two parents with challenging health issues who live in two different places, then three kids under 5... oy. We go to Paudie's soccer games and see all the grandparents there cheering on their kids and it just depresses me because he will never had that. Of course I never really had that either but for entirely different reasons and look how okay I turned out. Or maybe I just feel sorry for me. Last night within an hour I spoke to my father who apparently knows best when it comes to what of his medications he will and will not take then went to see my mother who I was sitting with and speaking to and she later confessed she had no idea who we were the whole time, thought we were a family that coincidentally looked like her own.

Okay enough of woe is me. We all have our shit, I know.

I can't believe July is going to be ending soon. We have had a great summer despite crazy parents and crazy kids and crazy heat. I am already dreading winter cos there is no point in trying to be optimistic about this one, it's gonna be off the hook.You don't get two mild winters in a row. You get one and then like 50 brutal ones. Why didn't anyone ever teach me how to ski, how to have love in my heart for snow and cold?
Posted by paudie's ma at 4:34 PM No comments:

time flies when you're having fun

That's what they say, right? So another month has flown by. I'll recap by going back to late May when this photo was taken. About every two years it seems we have a photographer come take pictures of the kids. And it's a stressful event for me because I'm a perfectionist so it's all about buying new clothes, keeping them clean, hoping for good weather, happy kids. So when a small blinde curly boy splits his head open the morning of said photo session, it kinda puts a damper on things. Our first stiches episode. Let's be honest though, with Noel's personality and track record, it's amazing it didn't happen sooner. Our pediatrician stitched him up lickity split and he was home in time for the photographer. Not the happiest camper, but he rallied. And I even lifted myself out of my catatonic state as well. Yes, I was watching Noel when he slipped on the wet bathroom floor and split his head on a stone ledge into the shower. And I was completely useless as I am in every crisis.

So yeah, there's the family. Pretty good huh. Our Miss Eloise has officially outlived Cian so now our firstborn is our youngest child. I look at her, how cute and fun she is and feel so sad. It's so hard to remember Cian like that because there wasn't a lot of happiness for him at the end. And all the bad overshadows much of the good unfortunately. All the drama casts a shadow on the mundane.

Okay I've slapped myself and am moving on to happier thoughts. Summer is here in upstate NY. Paudie is playing soccer. Finally. What a scene it is watching 4-5 year olds try and do anything in a coordinated, organized manner. He loves it though. He was goalie in his first game and was lucky to have his stocky younger brother play the role of water boy and co-goalie.  All the other parents have adapted to Noel. That he thinks he's a player to and is often on the field during the game. And because he's more boy than I am mom, I can't really control him. John has been subsititute coaching for the past few games so I've been in charge of Elle and Noel which is where the issue comes in. I keep hoping P will make some friends with the younger kids who will be in his class in the fall but all he does is gravitate towards the older ones. But it's all good and we are starting to meet other parents. Now let's not get crazy here, I didn't say I was making friends - but it's a start. There should be a match.com type service for mom's like me. Shut ins.

We also joined the Genessee Country Museum last week. For anyone visiting upstate NY with kids, a must see. It's only 10 minutes from our house, one of those huge outdoor museums that make you feel you've stepped back in time. All the people who work there or waaaaaayyyy into it, living like it is the late 1800s. Going there was  a blast from the past for me - I'm sure I went there for a field trip every year of grade school. But it was great to be outdoors, doing something interesting and educational. Seeing how people lived in the time our house was built. John was outside working on the front walkway last week when the great grandson of the original builder/owner stopped by to chat. Love it. Told us a key reason he built here was to be close to the railway into Rochester. See, even 120 years ago it was all about the commute.

In other news, Princess Eloise is turning into a handful. I forgot how that happens at about 7 months. Amazing how when your brain thinks it's done with a piece of information, it just discards it. So it all came back to me this week. Fussy, loud, grabby, wants to go. At least she isn't crawling though, which Noel was at this age. My god we've been chasing him for a long time. I keep telling myself, it will all be a lot easier one year from now. Not that it's hard now, just so exhausting. Noel was up at 5 today, walked into our room, turned on the light. Then screeched like a maniac for another 30  minutes. Back up at 7:15 happy as Larry. Why doesn't he need sleep? Why can't he love sleep like his parents and other siblings do?

So that's the latest. I'd say Happy Fourth of July to all but everyone knows that it's a major bummer when the Fourth falls on a Weds.
﻿
Posted by paudie's ma at 12:33 PM No comments: