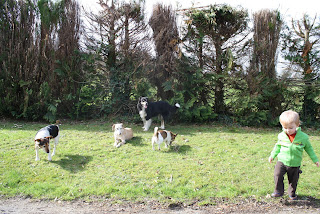 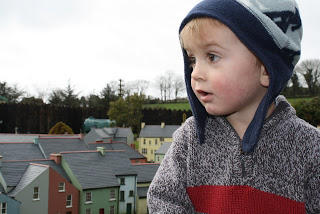 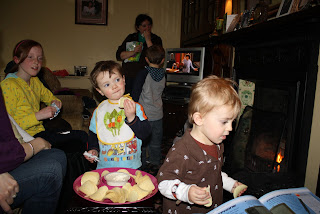 Here it is March 20. This means we are now past Cian's 3rd birthday and the plane rides to and from Ireland are a thing of the past. The jetlag really helped me cope with the birthday this year. I was honestly too tired to bring myself to a bad place over it mentally. And like I always say, it is the weeks and days leading up to it that are much harder anyways. The plane ride over to Ireland wasn't great - well it was great in that it was half empty and we got in an hour early (as opposed to like 10 hours late) but Paudie struggled. I think his ears were at him, and he was completely overtired. He got about 2 solid hours of sleep, 2 not so great hours, and 90 mins of crying. He slept the 2.5 hour drive to Cork.

The highlights of the week were the farm animals. The 4 dogs pictured above, the cows, the cats. Every morning Paudie wanted to go outside and see the badoggies. If he didn't get his way, he was kind of a little biatch about it. He wasn't as much as a terror getting into things around John's mum's house as I thought he would have been - was actually really into the lego blocks and action man/ken doll like toys she had. We spent most of the week with John's family - Paudie has lots of cousins in Ireland, a few not much older than he is. He was on a high. One night we were at a party at his sister's house and she brought ou trays of pringles and the little devil was eating them by the fistful. After I cut him off, he was scrounging for scraps on the floor. That's our boy! (I tried to insert the photo here but blogger stuck it up top).
The first two nights were bad in terms of his sleeping, but by Monday night, we had him on track largely thanks to his father's persistance in getting him to take a decent nap. The 3 of slept in a double bed the first 2 nights - not a good scene. But by Monday night, he was into the porta-crib. He was also good about wake up times - anywhere from 7:30 - 9:00. All in all, he travels well.
Another fun thing we did was go to the Model Railway Village in Clonakilty. It is so damn charming - all these little reproductions of nearby villages from the 1900's along with about 5 or so different trains going around. Will try to insert a picture: Okay that one went up top too.
Other highlights of the week... looking at the calves, some fancy meals out and his ow 9 euro fish and chips lunch, buying new wellies, eating lots of things he normally wouldn't eat, throwing a small ball around the airport/playing catch with strangers. Paudie definitely seemed to mature last week. More chat out of him. And when we got back on Sunday, the kids across the street were playing next to our house - Paudie went right over and took the basketball off of a 5 year old. That's our boy!
The sleep schedule this week has been not great. He was up at 5 on Monday and Tuesday. Ugh. I guess my clock was sorta screwed up too so I didn't mind as much as I normally would have. On St. Patrick's day he was decked out in green. They had a party in daycare - the leprechaun's painted their tongues green. Perfect for his 4:15 doctor appointment that day. As per usual, the boy totally lost it. Even in the waiting room he was starting to get pensive. We learned that he is now well off the chart for height, and down to 50% for weight with his 26.1 lbs. Hopefully now that we are home and things are quieting down we can try to get him to eat a little more.
The weather is starting to turn more tolerable - I think the snow is over and out. Paudie is really into the playground right now - there is one by our house that he has only been to once - we drove by the other day and the neck was craning like mad. I am looking forward to getting him outside because this winter has seemed eternal. Do they actually get worse every year, or as we get older, do we just become less able to cope?

love me some ptsd

Some days I really question my ability to be the best mom I can be. I know the whole bereavement thing is an enormous handicap, but still, my philosophy is that you can overcome so much in life. Unless you are me, and it has to do with the health of your only living child.

We are off to Ireland tomorrow night. We were also supposedly off to Ireland on Friday Augst 25 2006 but that didn't happen since we had just been admitted to Children's Hospital the day before. That all started with a presumed ear infection on Monday the 21st. When Paudie came home from daycare on Monday he wasn't right, and had a fever. So off to the doctor go we, and my zombieness/PTSD starts. It is intensified when doc isn't even sure Paudie has an ear infection as his right ear only looked minorly irritated. He gave us a presecription anyways. My this all sounds and feels familiar. I think I am exagerating some, but still, can I just get a break and stop feeling like I might be on the verge of reliving some horrible experiences?

Did I mention Cian would have been 3 on Saturday? So yeah, this is a bad week. As I have said many times, it is harder to anticipate an anniversary than it is to, well, just live through the day. And we have three of them each year that will forever make me feel like ... well just really unhappy... for the rest of my life I am pretty sure. The weeks leading up to an anniversary just suck. It just sits in front of you, dark and looming. For the past several weeks I have found myself thinking about the excitement and anticipation I had leading up to Cian's birth - how foolish I feel for thinking it would all be so great. I guess it was, but boy, was it shortlived.

But then the rational part of me kicks in and says, you know dear, you wouldn't have Paudie if you never lost Cian. And can you imagine your life without that blonde ball of terror and energy? Hell no I can't.

Anyhoo Paudie is on the mend - fever broke yesterday and he was back to Wendy's this morning. I have anxiety about him having ear pain on the flight, but fingers crossed he will be great. We bought him his own seat for this one even though we didn't have to. Just couldn't imagine holding him for 6 hours (or 12 should there be a medical emergency). I am very excited for him to see all of his Irish cousins - he is going to have a blast with them.

So we are honoring Cian this year by taking the trip he never got to - and we will continue to honor him by enjoying ourselves and the gift he gave us.
Posted by paudie's ma at 11:56 AM No comments: