the winter of our discontent, 2011 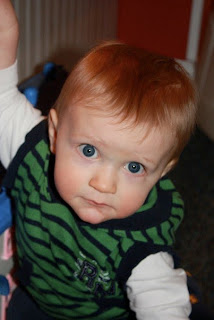 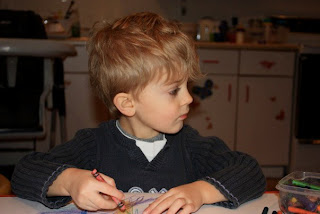 Some recent shots of the boys taken at daycare. We haven't uploaded photos off of our SLR in about six weeks. I like the photo of P because he has the cutest little nose I think. And Noel looks like such a doll in that picture even though over the last two weeks he has become tyranical. I don't know what happened to our nice placid baby. Ever since Noel started to be more independent he has become incredibly dramatic. Lots of screaming and crying, particularly when you take something away he wants or close a door. It's not at all becoming. I'm sure Paudie was the same way it just feels more pronounced with Noel since he has always been a happy go lucky kinda bub.
It's been three weeks since I posted. January has felt long and rotten. Yes I am aware that it was only weeks ago I was chomping at the bit to get past the holidays and into hibernation. But I've really been feeling sort of blah lately. Seasonal affective disorder? Maybe. Feet and feet of snow? Yeah that sucks too. I just haven't felt inspired to post. Boys are great. Really. Paudie continues to impress and amaze with his imagination, comprehension, vocabulary. So fun watching him develop. Noel is getting more teeth and working on learning how to walk. He's sleeping brilliantly - actually P is as well. Sleep really does wonders doesn't in? Nothing like a solid 8 hours. We've been trying to stay as busy as we can to help pass the time, burn the energy. Hit the Harvard Museum of Natural History a few weeks back. Not a bad little day out for the family. Interesting to see such an old school museum. Then this week John had the two over at the Museum of Science - he's brave going it alone. But they had a great time. I worried Noel was too young but he enjoyed the hands-on room for the youngins. John continues to be a wonderful husband and cook like every night and P has emerged as his helper. Or his hindrancer. P really can be an amazing kid but he still throws the occasional tantrum like nobody's business. Got to experience that last night about one minute after walking in the door after working late, taking the T and navigating huge piles of snow and slick sidewalks on the walk home. God I just wanted to turn around and walk out the door. I long for the day he is old enough to reason with.
Work has been steadily busy which is good for making the time pass faster and keeping my mind off of things that are sort of eating at me. I wish I would say all the busy-ness is from selling lots of product. It's not. But I do feel much more engaged in life when I am engaged at work. There's nothing worse than feeling unproductive and bored for 8+ hours.. Okay that's not true there are a lot of worse things but I do feel that when my mind is working well, I've got my lists, I'm taking care of business, that somehow it translates over to my personal life, like carry-over. I get home and feel energized to keep things moving forward.
It's almost 4:00 on Friday. Kids are at daycare and will sleep well tonight. I'd like to say I'm looking forward to sleeping in tomorrow but I can't think of the last time I slept past about 7:30. No real plans for the weekend - exactly how I like it. Oh - so John and I committed to trying to live on a budget this year. Ha! OMG - have you ever tracked every penny spent every single day? We are almost done with month one and it has been eye-opening. I really can't believe how much we spend but I really don't see where we can cut back. Food shopping and gas are where we seem to spend the most. I was thinking maybe we could become crazy obsessesed coupon people but the minimalist in me doesn't want to have shelves and shelves of toilet paper sitting in our garage. So yeah, a budget.
Posted by paudie's ma at 3:37 PM No comments: 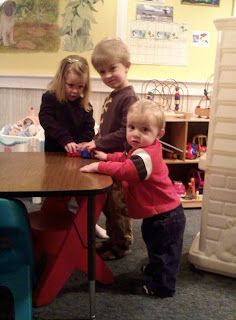 So in my last post when I was all, yay, about 2010 being a pretty good year for our fam but worrying that my premature good feelings about the year would doom me... let's just say I know myself, our life and circumstances that can't be changed a little too well. And that I'm just going to keep my mouth shut in the future. 2010 ended on a lousy note - the raison d'etre for this will reveal itself in future postings.

Today's pic is hot off the press. This is Noel at daycare this AM. Noel has a new obsession - standing. Noel cannot fall asleep anymore because he has to OCD stand. He can have one eye closed and be 90% asleep and he will still attempt to pull himself into a standing position. He perfected standing over our Christmas break in NY. He really gave us a run for our money. Waaayyy too much energy! Or maybe I'm just old and sluggish. But he's definitely in that stage of total troublemaking. No clue what he is doing - that you can't crawl down stairs head first, that kind of way. We had Noel at the doc this week for his 9 month visit, doc was impressed, said he's looking 'awesome.' Clocked in at 25 lbs and 33 inches - this is four lbs and two inches bigger than his bro at the same age. Such a big boy.

Even though both boys had irritating coughs over the holidays and even with the issue that shall not be named, we had a pretty good time I guess. Time away from work and routine is always cherished, though too much time away from routine makes everyone a little zany. One great thing about being in Western NY - no blizzard! How fun to watch the east coast blizzard on TV from the middle of a snowbelt and not have there be even one flake falling. So we didn't get to go sledding or build a snowman, but we did eat at our fave Rochester spots (Schalers, DiBellas and Pontillos) and hit Wegmans a few times. Visited with my mom at the nursing home - we found a small centipede (gross I know) under her bed so that was like 30 minutes of excitement for Paudie. As you can imagine or perhaps know from experience, pre-schoolers aren't wild about spending time in nursing homes. We got a lit of mileage out of the centipede - even talked him up the next day, saying we needed to get back and make sure he didn't find his way out of the trashcan we left him in.

Got back Sunday afternoon. Our car was jam packed. It was absurd. There are still toys and things all over the house. We have to get the tree down too. So depressing to un-decorate. So yes this weekend will be about trying to take control back. Blerg.

One more cute kid thing to share. Paudie has a new thing - it's called, "right Mom?" He makes a statement and it ends with 'right mom?" A statement that is true. One that is clearly false. One that makes no sense at all. Doesn't matter, he defers to me. Makes me feel all-knowing and wise. He has also developed an obsession with "How It's Made" on the Science channel. Doesn't matter what is being made, he will watch it. It is like some huge treat for him to be able to watch it. He barely watched any cartoons or kiddie TV in NY, was all about How It's Made and Factory Made - let's face it, they really are the same shows.
Posted by paudie's ma at 1:29 PM No comments: