putting our winter life away 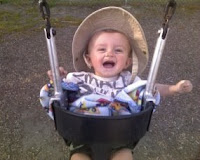 Wow, Paudie's hat really looks kinda crazy in this photo huh? This was taken yesterday at the playground near our house. He loves the swing. Too bad I can't upload a soundtrack to this snap because it would be the sound of pure and unadulaterated joy.
Paudie had a head cold this past weekend. That's the best we can come up with to explain his out of control behavior at night when he was meant to be sleeping. There was no sleep Friday night, there was some sleep Saturday night. There was lots of crying and downward dog and attempts at crawling and fits of sleep in unusual positions. He had a runny nose and John had been sick so we are hoping he was just dealing with feeling icky.
At one point this weekend the sun caught Paudie's face a bit odd - or perhaps it was the angle I was looking at him - and his eye appeared black to me. I think I almost dropped him in a manic state of shock. Then it passed and as much as I stared, I could not see the blackness again. It was scary, surreal. A flashback. It's like I have worked so hard to convince myself IT can't happen again and in that moment it was indeed happening again. Maybe it was my mind playing tricks on me. Whatever it was, it was cruel.
Paudie is eating better - actually starting to devour the foods he likes (bananas, plums, prunes) - granted I wish he were devouring veggies, but I'd rather have him chow on fruits with much gusto than spend time trying to pry his mouth open and have nasty gagging fits that lead to barfing. He still has no teeth. In fact, the one iots of tooth he did have poking through the gum line appears to have retreated. The crawling effort is advancing. He is officially creeping around and rocking on all fours with his butt up in the air just raring to go. I can't believe he is going to be nine-months old. Being with him makes me the happiest I've ever been which is like mega happy since the grief of losing Cian recalibrated my mood barometer. He's an angel, pure and simple.
Posted by paudie's ma at 1:23 PM No comments: 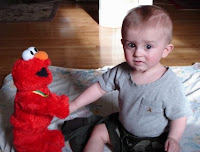 Paudie does not trust Elmo.

I look back at old posts and have to laugh - the boy has been teething since I started this and still no tooth. The tiniest spec of white is showing on the bottom right side - I foolishly thought that meant that a tooth was imminent, but I was wrong. I actually am a big fan of the goofy gummy smile so I'm not in a real hurry to see those pearly whites, I just wish I could stop wondering, is he not eating because he is teething? is he not drinking because he is teething? does he wake up screaming because he is teething? Those are three issues we are dealing with right now - well actually he is starting to develop an appetite - finally! We were at a picnic this weekend with another little boy, about 6 weeks older, and encourage Paudie to watch the child as he wolfed down quiche and crab cake. Maybe something rubbed off on P because since then he has been more involved and seemingly happier to eat. Even had his first egg yolk - mixed with banana though. I know, sorta gross.

Paudie still can't crawl. But he's close. And he is trying to pull himself up. We brokedown and started to childproof. Our first step - move lots of furniture out of the living room. It's quite bare but there is far less for him to get into trouble with now. We also need to buy a larger rug - the hardwood floors are just so enticing for him, maybe because he can push himself backwards and get a good slide going. But he is always coming thisclose to smacking his head off of it.

We had out picture taken Friday night for an article on our other son for CURE magazine. The photographer was an hour late and Paudie was not a happy, willing subject. I can only imagine with the shot is going to look like. I don't even know if he got anything usable. I'm sure whatever it is, Paudie will look adorable and John and I will look awkward as all getout. We weren't allowed to look at the camera. I'm sure I'll be mortified.

I almost forgot - we took Paudie to his first Gymboree music class. Guess what? Paudie hates high notes. I always knew he had weird aversions to certain noises, but when the teacher hit high notes, he lost his shiz all together. Luckily there was only one other little boy there, but I did feel bad - the teacher was like, um okay maybe Padraig isn't ready for this and the other kid was looking at him like, dude, shut it! So that was a bummer. He liked the hands-on pieces of the class - drums, maracas, the ball... but clearly he is not a fan of la, te or do.
Posted by paudie's ma at 12:15 PM No comments:

Paudie celebrated his 8th monthiversary yesterday. He has boundless energy - he continues to improve on his rolling skills and considering we have a tiny living room, he doesn't have far to go to get into potential trouble. I think we are going to basically remove everything except the couch, a chair, the TV and the rug. I can't believe how fascinating every little thing is to a small person. He is particularly interested in magazines, shoes, toes, and the edge of the rug. His crawling really hasn't progressed which I am viewing as a good thing for us - gives us a bit of a break. We already joke that he's definitely going to be one of those kids on a leash once he can walk. He is also starting to show the smallest bit of tooth - but I am sure it will be several more weeks before victory is his.

I signed us up for a Gymboree music class this weekend - no clue how that will be but figure we should check it out as Paudie seems to really like music. Every time there is music on TV he watched intently and sort of zones out. I sense a future rock star. Yes!
Posted by paudie's ma at 12:49 PM No comments:

the bigger they are...

Paudie has taken a few tumbles lately and it's really distressing. It's easy for seasoned parents to say things like - he's going to fall down, don't worry - but this is how my mind works:

Because I have the experience of literally watching tumor grow on Cian's skull overnight, bumps and lumps really scare the shiz out of me.

Paudie still has no teeth. Still can't really crawl either. He just gets really frustrated. His grabbiness is still everpresent. And he's getting loud. Oh, and he hates food. Except for bananas and yobaby yogurt. Anything else mushed or mashed = gagging = masive vomit. Some days I worry he isn't going to put on weight, other days I know it will happen and we can't try and force the situation. I just wish I could experience the joy of watching him really chow down. It's no fun stalking your child with a spoon.

We're almost to the 8 month mark - another milestone. Though I did have a flash of craziness in BJ's last night as we were buying 3 cans of formula. I actually had one of those thoughts like, will he still be here in three weeks? It went as quickly as it came, but clearly I have some more healing to do...
Posted by paudie's ma at 2:01 PM No comments: