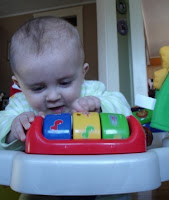 I love that photo of Paudie. So intent. So digging the slot machine-like toy on his exersaucer.

So Sunday came and went. Paudie reached the milestone of 5 months and 17 days and no cancer diagnosis. No health issues to speak of. This is huge milestone for our little family as the last time we had a baby boy reach 5 months and 17 days, by 10:00 that night we were informed he had cancer. Instead Paudie's 170th day on this earth was an uneventful. For that we are incredibly grateful. Our next milestone will hopefully be reached when he is 7 months and 6 days.

Personality wise, Paudie is a real firecracker. In Paudie's world, things are either so good, or its polar opposite. The kid is either on top of the world and the tears are flowing copiously. He is getting the hang of rolling over from belly to back, but we still have some work to do on the return trip. He is also able to sit on his own for a bit which is too cute. Teeth are still MIA, though with the lines of drool and red rosy cheeks, it seems like his gummy smile may only be with us for a little longer.

Paudie has become an adept grabber. Loves to pull at our faces. It starts with a good slap, then a fierce grab hallmarked by razorlike little fingernails that are never short enough no matter how often we cut them.

Next week Paudie is participating in a research study at Children's Hospital that seeks to understand more around how babies recognize faces. I think that will be pretty interesting. Maybe the researchers will tell us we have a genius on our hands. But chances are he'll just poop and attempt to eat any pictures they put in front of him.

embracing the power of negative thinking 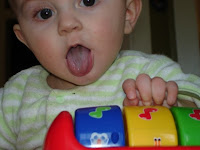 Paudie is 5 months old. Our first son was 5 months old when he was diagnosed with neuroblastoma. Now that we are here again, it's extra hard to believe how little Cian really was when he was diagnosed. In our memories he is larger than life.
Given Paudie's age, we elected to have a proactive ultrasound done of his belly just to make sure nothing is there that shouldn't be there. It haunts us to think if we'd had even one of those with Cian, the outcome may have been different. Anyways we had the scan done last week, the second one we have done with Paudie. I know the doctors think we are nuts - Paudie is at no additional risk for the disease so there really is no medical rationale for doing it. But I suppose they realize the value of our peace of mind - even though it is a small piece of peace. The scan was clear. Though the reading radiologist was kind enough to point out that just because the belly looked clear, that's not to say disease couldn't originate further up his chest. Thanks doc!
It's also amazing to experience the differences between the two boys. Cian was very physical. He rolled over early and spent a lot of his time rolling over, playing on his activity mat, bouncing in his bouncy. Paudie is much more verbal. Always making noise, laughs very easily. I see the differences and it is somewhat heartbreaking. Maybe they are just different boys - I know that only rarely are siblings alike - but I can't help but think how truly awful Cian might have felt for a few weeks prior to diagnosis. He didn't chat or laugh like Paudie does, but he was always smiling. Even through toxic chemo treatments, the kid would sit there smiling.

Here I am rehashing it all again. I need to stop that.
So - moral of the story: Paudie's scan was unremarkable and as parents we can breathe a sigh of relief for a little bit. I try really hard not to get obsessive with my cancer fears - I like to spread my fears out evenly. Kidnapping, SIDS, accidents - I worry about them all in some feeble effort to prevent anything bad from happening. It's an approach I intellectually know is useless but I gotta work with what I got.
Posted by paudie's ma at 3:13 PM No comments: 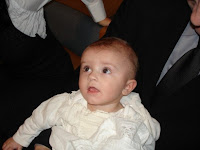 I am so disgusted that I haven't been devoting sufficient time to waxing poetically about my wonderous little booboo. Work is really interfering with me exercising some creativity, and some demons. I first thought this would encompass way too much boring and useless information for anyone to read - clearly hasn't been the case. Bah. So not the chronicle of Paudie's infancy I had envisioned. Damn you corporate demoralization. I will do better. In the meantime, check out Paudie rocking his antique baptism gown.
Posted by paudie's ma at 2:00 PM No comments: