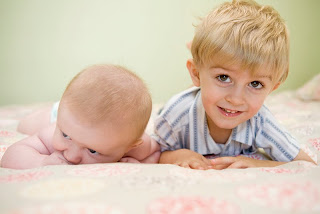 13 years ago today, Princess Diana was killed (I learned of this while celebrating my 25th birthday at JJ Foleys).

5 years ago today, I had an ultrasound of a 12 week old fetus that would eventually be known to all as Cian.

Also 5 years ago today I watched in disbelief as Katrina hit New Orleans; I thought to myself how lucky we were.

4 years ago today I sat in a hospital room on 6N in Children's Hospital still so devastated by the news that my son had cancer. I wondered if he'd ever smile again. I was not feeling lucky anymore.

3 years ago today I was 39 weeks pregnant, getting ready to welcome another little boy into the world as well as an inordinate amount of accompanying anxiety.

2 years ago today I was picking myself up from a miscarriage and wondering why things had to be so hard.

1 year ago today I found myself 8 weeks pregnant.

This morning John and I subjected ourselves (and Noel) to a belly scan as a peace of mind measure - making sure nothing is there that shouldn't be. The tension was absurd. We did not speak. I did not sleep last night. When we got the all-clear from the radiologist, we almost cried. I don't want to be this way. I want to let it go. But I can't.

So Happy Birthday to me.

I am not happy about getting older. I am finding it harder and harder to deal with anxiety that seems to be increasing in my life. It all stems from living through something that most people would say is irrational. It is an irrational fear as a new parent to think your baby will die. Everyone thinks that right? It is a fear all new parents have. But it really happened. Any because of that fact I struggle with how to manage other irrational fears. I'm going to get into a car accident. Noel is going to have cancer. Paudie is going to get hit by a car. The list goes on and on and I am so angry that I can't control the workings of my brain. I hate you neuroblastoma. I hate you for taking my son and for making me someone I don't like much of the time anymore. I want to be happy but even at my happiest right now it's still a fraction of what it means to be unequivocally happy.
Posted by paudie's ma at 3:13 PM 1 comment:

Funny, as in sad 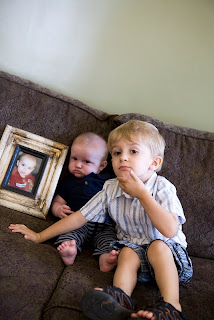 So if you ever told me, oh say 5-10 years ago, I'd be the mother to 3 boys, I'd have laughed uncomfortably. If you'd told me one of them would be heavenly only months after arriving, I would have thought you were lying. But such is life. And now this is how I get a family photo of my three boys. This photo is really more of an outtake from a session we had at our house a few weeks back. The look on P's face makes me kinda smile at an otherwise sad image.
Have to put it out there that Tuesday marks 4 years since the most horrific day of my life. It feels so far away. Like it's in the rearview mirror and I am really squinting to see it. But I am such a different person for having lived through that day and all that followed - including the 1400 days since. I was thinking today that Cian's illness and death was the pinnacle of stress for me and maybe that's why I cope so well with stress. It's not even coping with stress - it's like I am teflon for stress. Now anxiety is a whole other ball game, but I've been to the apex of stress and I don't think I will ever go back. Kinda makes me a bad employee at times and sometimes I even question my parenting skills as a result.
It's kind of nice that only two weeks after Cian's dx anniversary we have P's birthday to pick us up. I can't believe he is going to be 3. When he's happy, he's so much fun. When he's unhappy, he's incredibly dramatic and that too can be kind of fun if it wasn't so ear piercing. Like this Am he had a miniscule splinter in his foot - John needed a huge toy magnifying glass to see it. You should have seen the limping. You'd think he had a broken foot. He really has a flare for the dramatic. Has since he was a baby.
Speaking of baby... Noel loves food! Praise the lord baby jesus we have an eater. Last night he lapped up a jar of peas like I would a dark chocolate pudding. He is a dream baby. So relaxed, so giggly, so fun. A lot like Cian. I thought for sure I'd be punished this time with a colicky screamer, but we have been blessed with an amazing baba. And when I look into his big blue eyes, I feel as if I've looked into those same eyes before and it brings me comfort.
We took Noel for his 4 month check-up last week and he almost broke the office's record for size. he clocked in at 21 lbs - two P didn't weigh that much till he was 9 months old. Noel is totally going to take P out in a few months and I have to say, I am sure he will deserve it. P does a lot of regressing around Noel - like suddenly his favorite toys are Noel's toys. I find it pretty irritating, I can only imagine what Noel will think if the behavior continues. Gonna totally take him out.
It's fun to read back over this pathetic blog and see how when P was Noel's age, I was soooo gaga over him - then over time as he has gotten older and all the toddler stuff has set-in, there isn't as much outright gaga-ness. Now to have another cuddly, chubby, toothless baby around who is so innocent, it's wonderful to feel that gaga all over again. Part of me honestly cringes at the thought of doing infant-mama all over again, but another part of me can't come to terms with not having any more gaga in only a few months.
Posted by paudie's ma at 3:13 PM No comments:

Reunited and it feels so bad 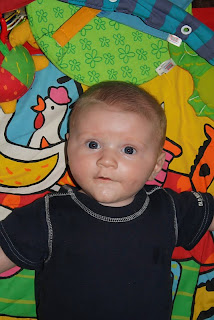 Before I get into what the title of this post means, let's reflect on how cute Noel is. Awww. He is officially 4 months old. Drooling like no tomorrow. Rolling over - both ways. He is actually a compulsive roller. At night when he wants to sleep he just keeps rolling over, crying and barfing from laying on his stomach. It's a vicious cycle. I gave him a little oatmeal last night because he has been so cranky about taking the bottle. I had hoped some semblance of solid food would do the trick and make him happy. It didn't. But he wasn't horrified either.

So this weekend I went by myself - well, I went with my friends but sans family - to my 20 year high school reunion. All I can say now is what was I thinking? I gave up a weekend with the fam to hang out Friday night in a hideous townie bar with, for the most part, people I was never friends with. Don't get me wrong, there are definitely a handful of smart, interesting people from the clas of 1990, but for the most part, it was a bust. We didn't even go to the picnic Saturday. In true high school fashion, we drove up to it, didn't like what we saw and drove away. Anyhoo I had my first night out in 18 months so 3.5 drinks later I was totally intoxicated. So hungover the next day. So between being hungover, tired, alone etc, I spent way too much time being introspective. Thinking things like, hmmm... 20 years. Am I where I thought I'd be? Am I happy? All the shit I am better off just not thinking about.

So Satuday I spent some time alone with my mom at the nursing home. Never really spend time alone with her since the fam is always with me on my trips. Again, more time to introspect. Is that even a word? My friends and I hit the beer tent, a la Hilton Zoo, Saturday night. This is basically a huge frat party on carnival grounds. Free to enter, bad cover band, no lighting, lots of smoking and Genny Light cans for $2.50 each. Never drank in the beer tent before. So I can cross if off my list. I can remember the Hilton Carnival being like the best 4 days of the summer, what you looked forward to the most just to walk around it 500 times and ignore people you went to school with. This time I was walking around it clutching my purse and feeling like I should go give some parenting lessons to the people letting their 2 year olds drink soda from a can at 9:30 at night. And the security guards! What is life coming to in the little town of Hilton, NY? Security guards at the volunteer fireman's carnival?

Sunday was tense. I just wanted to get home to the boys. I felt guilty for leaving John to take care of them all, and I didn't even have the time of my life. Should have been at a spa. So the plane is about to take off at 7PM... then back to the gate we went. I swear I almost stood up and started to shriek, "Noooooooooooooooooooooooooooo!!!!" But I held it together. Even when it looked like my best chance to get home was a 6:oo AM the following morn via Washington DC. But USAir came through and got me home for 11:00. And really I wasn't bitter that I had to spend $50 for a cab since the kids were in bed.

So there was my weekend. When I first saw Noel Sunday night it felt like I hadn't seen him in months. He seemed slimmer and blonder. Paudie looks the same but isn't being a very nice boy to me. And his potty training is not advancing very quickly either. I just hope some day soon he wakes up and is ready to say goodbye to diapers forever. Well at least for the next 75 or so years. Even super hero underwear doesn't pique his attention.

As I sit here typing and thinking, oh my aching back, something else I will add is that in an effort to make my stomach muscles behave and GO BACK to where they came I am binding my belly. Yup, like a girdle. So we shall see. It's helping with my posture which I really need to work on since someone asked me at the reunion if I was pregnant (because of the way I was standing he says). So we'll see if the belly bandit can work magic or not. There is no time for exercise.