Spring may have finally sprung here in New England and boy what a difference some sun, a little warmth, budding trees, singing birds - you get the idea - makes. Remind me again why we live here and torture ourselves through months of frigid temps? The kids are great, so happy to be spending more time outside, playing with toys and taking in nature. I'm happy to strip away a few layers, put the coats and hats away and have tired little kiddies who are easy to put to bed at night from all the fresh air and running around.

Had a good easter last weekend. It wasn't great because 1. Saturday was 40 and rainy all day, 2. P woke up grumpy and confused about the Easter Bunny and 3. the Easter Bunny did a crap job with the Easter Basket. P was less than thrilled with it and I have to concur, it was lame. I failed at Easter this year. At least I can do better next year. The weather was amazing though and we had a fun afternoon with the cousins and an egg hunt. Noel wasn't really digging the egg hunt, he was more focused on experiencing grass for the first time. He was intrigued yet put off. He kept falling on his bum but he couldn't stand to touch the grass long enough to push himself up. They spent all afternoon outside - slept so soundly that night.

Noel continues to get more communicative. Starting to imitate now - likes to try and blow his nose, use a fork, give kisses. 13 months is an exhausting age, but it's also an exciting one where every day you start to see something new in your child. With Paudie things are kind of leveling out, change and advancement is incremental. But with Noel, new skills just suddenly seem to appear. I had forgotten what that was like. With Paudie we were so focused on it because he was the only child so I know we drank it all in, but my mid-life mind can't seem to retain very much of anything.

Like billions of other people, we did watch part of the Royal wedding this AM. Paudie was interested in it given his own relatively recent pageboy experience. Well that and all the horses. He suggested I wear a veil to work today. I was surprised to get as sucked in as I did, but I think I'm just thirsting for some feel good type stuff right now. Is it just me, or do things feel really, really bad? Did my parents feel this way in the 70s and 80s? Were things as bad then as they are now? Everywhere you look, sadness, anger, idiocy. From the weather to politics, everything seems like a struggle. I also can't tell if I'm more interested in current events and politics now because I'm a parent or because things are so bad. But suffice it so say I'm very uncomfortable with where things are heading. The morons that get elected to make decisions for the rest of us. Forget the birth certificate, how about an IQ test?

Wait, this was supposed to be a happy post. Why can't I stop being Debbie Downer for the time it takes me to type all of this out?

So to recap, spring = good. Kids = great. State of the union = verging on Idiocracy.

Have I posted about the uptick in crime in our city? It's getting bad. Granted I understand we live in a city and cities have problems but the problems are spreading over into our quaint little section - and from all that I read, it's almost entirely drug related. In fact I tuned into Intervention the other night, one of my favorite shows to feel better about myself and my coping strategies and it's like, hey, this heroin addict is walking her dog on the beach... at the end of our street. Made us feel all warm and fuzzy to see her shoot up and then drive around. Watch this space, 3 bd/3 bath colonial coming soon...

where is my mind? 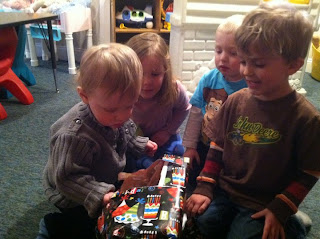 Here's a pic of Noel opening his present at his daycare party. P is looking on, being pretty reserved since afterall it is his official job to open all of his younger brothers' presents and play with-hoarde them. I'm also pretty impressed Noel is actually opening the gift himself since only the night before he was more interested in eating wrapping paper.

Noel continues to get more expressive and interactive. So fun to see a baby's mind really start to evolve, the things he is starting to grasp. Is at that stage where he puts things in and takes things out just about wherever he can. His milkaholism is also in full effect - the other night he sat crouched in the corner of our kitchen with nothing but a diaper and t-shirt on pounding a 6 ouncer. We've taken to watering every bottle down since it was all getting a little out of control. He doesn't seem to mind.

Paudie is Paudie. Hates to wake up on weekdays, balks at getting dressed in his room, has OCD about being the one to pick up his cup of milk and vitamin off of the counter every morning; turning off the TV; watching How Its Made. He's going for a dental checkup tomorrow so that will be interesting since I missed the first one. He actually went to the doc last week to have a cough checked out and I think it's the first time in over two years he wasn't screaming in hysterics. Haircuts still remain slightly problematic for him, I'd be perfectly fine to just let his hair grow a little long but problem is his hair grows up and not down. He has his father's hair for sure.

Hard to believe Easter is coming soon. I think we have to do a real Easter basket for P this year, though we haven't exactly talked it up, the Easter Bunny concept. He keeps asking about an Easter Egg hunt and all I think back to is the one (and only one ever in my life) we went to when he was about 1 1/2 at a neighborhood church. Massive hunt yes, but a little too much, how should I say this... propaganda... for my comfort zone. Raised Catholic, any sort of formal religious event that includes holding hands, dancing, guitars and clapping makes us, how should I say this... extremely nervous. The hunt itself was enormous and fun for the kids, but really does Easter have to be all religious? I jest! I get it, but it was just a bad scene for a little kid who wanted to get be outside picking colored plastic eggs off the ground - you know, picking things up and putting them in.

Also hard to believe is that next week marks the 11 year anniversary of that fateful night that John and I met at JJ Foleys. Have I already remarked on how cliched it is to pick up a Paddy in an Irish pub in Boston? Well I didn't exactly pick him up but whenever people ask how we met, it's like, he's Irish, I'm American, he's a carpenter and I work in software - take a wild guess how we met. Lot has happened in 11 years. It's always something to think of fate, to think, what if I hadn't had those X drinks on a pseudo-bender that took me from Davis Square to Landsdowne Street to last call in Downtown Crossing? That'll be a good story to tell the kids in like 20 years and they'll be all horrified that their crazy mom used to be fun and tie one on here and there. 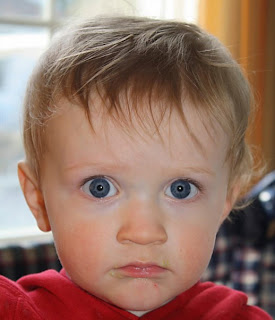 Ah Noel. One year ago today you entered the world and brought more light and love into our lives. You were the quietest, happiest baby. You never cried! You were a complete and utter delight. And those blue eyes of yours - killer. A little gift from your brother in heaven I think. And now as I think of you turning one... How you effectively dumped a full bowl of Special K onto my lap/the ground/the couch this morning making everything wet and cold and smell like milk. The cherished time you spend molesting Banjo's food, throwing it around the kitchen, and finishing with a hand-wash in his bowl of water. Your incredible armspan that has forced us to move every kitchen tool/foodstuff to the very backs of our counters and all of our piles of random things that don't have other places to go to the very center of the dining room table. Watching you take down your 3 year old brother, wrestle him into a headlock, steal his toast as he is trying to put it into his mouth - priceless. The morning earlier this week that you were sleeping so soundly next to me then woke me with a head-butt to my face with your humongous head, splitting my lip open - charming. Yes our little Noel is growing up - what a difference a year makes eh? Watching him go from this quiet, placid cuddler of a baby to a complete terror and roughneck has been, well, a surprise quite frankly. I always thought he'd be the calm one. But even though he's a squirmy, strong willed bull of a little boy, our special bond is intact. Noel was the first of our three children I could just completely enjoy in infancy. With Cian I was clueless and then, well, you know the rest. With Paudie I was still grieving Cian, felt guilt at any glimmer of happiness and was consumed with cancer striking again. With Noel, I just felt love. I was calmer and more confident. Things just clicked. So happy first birthday to Noel. Too bad you couldn't squeeze yourself down the birth canal only 35 minutes earlier, then you wouldn't be an April Fool's baby. But I digress. It's been a wonderful year watching you grow and change and I know that the best is yet to come. We're so lucky to have you in our lives.
Posted by paudie's ma at 12:10 PM No comments: