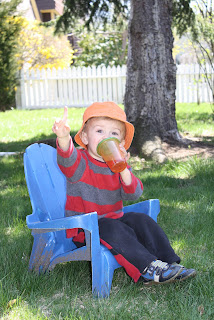 So last week we had a radical discovery at the dinner table: P likes ketchup. No, wait... P loves ketchup. He is a dunking fiend. We realized this during fish sticks, which is semi-plausible, but since have translated it to really any meal. Last night it was just P and I and he was struggling (i.e., chewing/spitting) with his chicken, peas and wild grain rice meal - so over I went and grabbed my red friend. Squeezed on some condiment and he was good to do. Was even saying 'mo kthecjejop' at one point. Which I translated as 'more ketchup.' Is this bad? I know it's high in sodium, but he eats so much better with it. Then I recalled how I used to eat macaronis and ketchup so I guess it's true about the apple and the tree.

We did spend last weekend in upstate NY with my fam. We left late Friday night, got in at about 2:00. Pau slept the whole way. It was all I could do to keep my eyes open. How on earth did I used to stay out till all hours I ask you? The weather was gorgeous - we hit some playgrounds and then Zarpentines for all u can eat pancake breakfast. Good stuff! After a nap... more playground over by my sister's house. It was a great day until about 7 PM when we realized he had a fever... then came the croupy cough. Sigh. It's always something with these kids I tell you.
Sunday we hung around the house, went to Wegmans of course. Pau's fever was in the 103 range in the afternoon so w ehad to up the medicine. Was still not great Monday so we laid low again. We left Tues AM, stopped at Lollypop Farm on the way to check out the dogs and farm animals. Was very nice that day - we had a great time looking at the animals. Will post some photos of that shortly. Pau was a rock star on the return trip, just watching videos and dozing. Has been sleeping well, in his crib, since we have returned. Oh, and his missing top tooth finally appeared! I know it was the culprit behind the tears...
Just talked to John - Paudie and he have been gardening like fiends. John compared him to a dog - apparently he likes to roll on the ground and cover himself with soil. There he is taking a much-earned break: 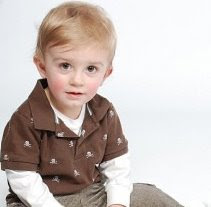 A pirated photo from the session last week. How cute is Paudie? Come on, he is like, baby clothes catalog cute.
After my posting last week a good friend emailed me and suggested perhaps I might experience better living through SSRI chemistry. Sort of made me think 1. hey, not a bad idea, and 2. I guess I can come off as a real mope sometimes. Did you know that mope means most-oppressed-person-ever?
So I'll try to keep it light today. The river of tears continues at our house. In talking to some other people, I guess it's what happens when you have children of a certain age. 18 months. So even though I think it's a lot of teething at once that has master P down, I guess toddler is as toddler does right? He needs more attention now and can't articulate why. So we are rolling with it. In other news... Paudie's chewing and spitting out behavior seems to be intensifying. It's like the Sex and the City episode where Miranda's date just chews his steak then politely spits it into a napkin. Except Paudie spits it down his shirt and on the floor. I have not heard about this from Wendy at daycare so I presume it is something special for John and I. But it certainly isn't going to get him out of his 50th percentile weight. I just wish for once I could see him eat a meal with gusto - actually, on Friday night he did pretty good with a slice of veggie pizza. I sawr some gusto there.
Easter was pretty lowkey. We did do an egghunt at a church in our neighborhood that claims to have had 10,000 eggs sprawn about. Of course you had to sit through about 40 minutes of singing and marketing for 5 minutes of egg hunt, but Paudie did a great job - I trailed behind with a bag. Good thing I noticed kids running by our house with bags the morning of or Paudie would have been only able to get about 5 eggs between my handbag and pockets. I have to admit, he did have some chocolate that day. I can't believe I, who was raised largely on soda and junk food, have any guilt about sweets. But I do have a little. But the boy likes his chocolate. In fact, his diet seems to be taking after mine. Pizza and chocolate! Hey - at least I'm not giving him coke in his sippy cup right?
Words are still few and far between. His interest in books continues to be steady. Paudie now likes to sit with adult books (usually upside down) and turn the pages, speaking out loud in his own language as if he were reading. Miss Wendy says he is quite a bookworm at daycare as well. That makes me happy to hear. Next stop - baby can read!
We are aiming to visit my family in NY this weekend for a few days - let's all pray the weather is decent so we can have outdoor time. As you'll recall, my parents' house is chock full of knick-knacks and what have you and frankly, they are both set in their ways so to see something out of place seems to really annoy them. For example, if Paudie takes the remote control and presses it (a major no-no given how convuluted the media system is), I will place it high out of his reach. Hours later, it will be back on the table. Paudie will take it, press the buttons, irritate my father, and I will place it high out of reach. Wash, rinse, repeat. Good times!
Posted by paudie's ma at 3:30 PM No comments:

That about sums up the past week or so of Paudie's life. Lots of crying. Crying at bed time, crying in the middle of the night. Crying during dinner prep. Crying at the photographer's. There is also a lot of hand chewing going on so I don't know if it is teeth pain behind all the emotion, his runny nose/head cold, his age or what but it's been brutal. And to make matters worse... he won't let me console him. Only John can do that. Sometimes if I even touch him to say, take his shirt off or change his diaper, that initiates the crying. The whole thing has me somewhat frustrated - I don't know what is wrong and I apparently am not equipped to make it all better. He seems to be doing well at daycare, which I guess is a good thing. But it's like lately, from the minute he gets home until he falls asleep, there is as much sadness as happiness from Paudie. While this doesn't wound me deeply, it just makes me wonder what is going on for him.

As mentioned above, we tried to do the Portrait Simple bunny photo session yesterday. He was a mess - Paudie, not the bunny. Lots of snot everywhere. Clung to John. After 20 minutes the very patient photographer finally was able to get some snaps in - though his hair, which is in need of a trim, was a holy show by the end of the tantrum. Once the bunny came out, Paudie lit up. Kissing the bunny, holding the bunny - an ear-to-ear smile. So I can't say the whole experience was completely worth the $80.00, but at least he got a few minutes of bliss which of course made our day.

Once we got home, Paudie helped John assemble a new cabinet from Ikea. Okay so helped is a strong word. At one point John said Paudie was like an assistant and I said, yeah a really bad and stupid assistant and he (John) seemed really offended by that. For the record, I was not referring to my child as those things - come on, the child is freaking golden. But really, if you had an assistant that tried to stand on a pane of glass as he was helping to make a cabinet, or one that was intermittently folding your laundry/throwing it in the trash bin, you would fire that assistant or at the least tell your friends that said assistant was bad and stupid.

As Paudie matures, I see a lot of parallels between he and Curious George. Yesterday he emptied our cupboard with all of the mixing bowls and baking pans - he put the largest one back in first in such a way that the door wouldn't close. He just kept slamming it over and over, taking the occasional pause to throw another bowl into the mix, then back to the slamming. As if sheer brute force would yield the desired effect. Has George written all over it.

Hoping for some decent weather next weekend so we can have some outdoor time - makes such a difference. I never paid much attention to the 4 playgrounds that surround our neighborhood but man, what a gift they are. I am so pumped for summer - even the fact that the boy won't have to wear a coat, which is one less battle to deal with, has me infinitely excited.

So that's the latest. Paudie is emotional. Is an interesting contrast to his ma who still marvels at the degree of numbness still cascading over her.
Posted by paudie's ma at 1:02 PM No comments: