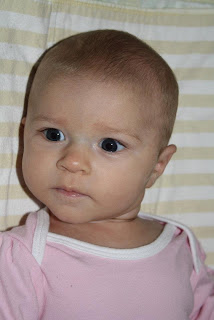 Since it's almost March I figured it might be time to emerge from under the rock I've been living under for the last 14 weeks. On November 17 we welcomed a baby girl into the world. And despite the fact that I was a ball of anxiety and stress during the pregnancy due to our move, my age, inevitable PTSD... (not to mention a labor and delivery experience from hell), she is a placid, sweet and very happy baby. A peanut compared to her three brothers - she weighed in at 7 lbs 12 oz. And continues to be 'average' as opposed to ginormous. I'm hopeful that this means she won't be amazonian as an adult.

So a girl. Yep. I call her princess buttercup but she's really more of a rapunzel since she spends all day long in a bouncy seat perched atop of our kitchen island. It's safest for her there. The boys love her sooooo much. And don't they have funny ways of showing it. I know she needs much more floor and tummy time than she's been having so we must adjust that in the very near future. Every time the pediatrician asks about that we just sort of smile and shrug.

Finding out I was pregnant with her last year was pretty shocking and I kept fretting over 'what if' given I would be pushing 40 - then there was also my absolute hatred of sleep deprivation. I know that no one likes to be sleep deprived, but I am particularly bad at it. But somehow we've made it through the newborn phase. It wasn't easy, but it wasn't all that nightmarish ever. I was so focused on Elle being the cause of sleepless nights yet the reality turned out to be that she was a good sleeper from the beginning and it was Noel that kept us up most nights. A menace that boy is. A blonde hair, blue eyed, dimpled and gorgeous freaking menace.

I will say that at this point in my life, despite feeling haggard, sluggish and dumber than ever, I do feel some peace about a few things. I remember right after Cian died I hung onto the notion of rebuilding our family. Of picking myself up, fighting back and having more babies - not that anyone could ever replace him, but in order to give him a sort of legacy and to achieve parenthood yet again. And I said I'd ideally have three more, right in a row. While that proved to be a little more challenging than I'd hoped or expected, we got there. It still stings like hell that in just over a week Cian will not be here for his 6th birthday, but to have these three other beings is something very special. They bring us comfort.

And to have made the move to NY is also something else I feel very proud of, that we set our minds to something and executed. Aw look, a work word. As I turn 40 this year despite that number making me cringe, I feel accomplished on a number of fronts. Sure there is still work to be done, but I've come pretty far given the hand we were dealt.

So here we are, in our pink house with our pink barn, couple boys, little girl and howling dog. In one sense I feel satisfied. In another sense I am horrified by the world we've worked so hard to help populate. Does it completely puzzle anyone else, the level of dialogue we are at right now in this country? It's 2012, right? Or is it 1812? Everytime I hear some dude on TV talking about birth control I want to punch him in the face. Kids are dying of cancer. Kids are dying in war. As a society we are fatter and sicker than ever. Life is hard. But let's rehash issues that I thought were settled a couple of decades ago. Let's go backwards! Or let's get a moon colony going. Let's do anything but arrive at decisions and policy that improve our schools, our economy and our healthcare. When I was little I was semi-obsessed with the possibility of Iran or Russia bombing us. In my mind the bomb would land in our front yard. I can't even imagine what my kids will obsess about.

Okay enough from the soapbox.
Posted by paudie's ma at 1:44 PM 1 comment: