How soon we forget... 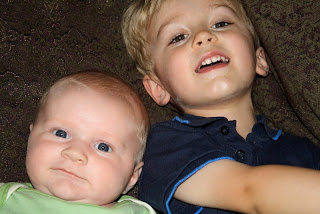 So there they are. The boys. In this pic Noel is very sort of Cian-esque. It's the eyes. And the roundness. Hard to believe Noel is nearly 4 months old. It's amazing the stuff your brain flushes when it determines knowledge to be no longer relevant. Like right now we are in a stage with Noel where he hates his bottle and is obsessively trying to turn over and getting very frustrated. Now I know I've seen this before but I'll be damned with who and how long it lasts etc. At first it's like... what is he doing? Why is he so cranky? Is something wrong with him? Then it starts to set in, the feeling of deja vu. Anyhow Noel remains completely charming and sweet. I really think he is going to be our eater. Cian never really got the chance to enjoy food and Paudie has hated food since the start. He has said that to us on several occasions lately. "I don't like food." But Noel seems pretty interested in what we are eating so fingers crossed we get to experience a child who happily eats.

The potty training with Paudie is going so-so. Good god what a pain in the arse it is. He actually does better with it at daycare than he does at home. He does on occasion respond to our bribing, but he has yet to really show initiative to go to the bathroom on his own. He is only 7 weeks shy of turning 3 so I hope it clicks soon because he already looks older than he is and I don't want people to think I have a 5 year old in diapers. Which I think they do anyways. The check-out woman at Trader Joes asked him how old he was and he said 5 and she bought it. Not because he thinks he is but because he can't count.

I am sitting here typing feeling that my eyes could close any minute even though I am getting a pretty solid 7-8 hours of sleep most nights. I wonder if sleep deprivation just hangs around as you get older? Or if being tired all the time is from getting older? I guess I just have to accept I will be tired every second of every day from here on out - comes with the parenting territory. Jaysus I miss sleeping in. I am so glad that I used to sleep till like 2:00 when I could. Who would have thought 6:00 could be the new 2:00?

So John is home with Noel. Just read an article in Parent's about how something like 25% of dads stay home with the kids now. Look at us, part of a trend. Meanwhile I am back at work trying to be productive. And wishing I head a treadmill desk. I have 8 lbs to lose. I know, not a lot, but my body refuses to relinquish it. I wake up starving every day, have a 400 calorie salad for lunch and carrots as a snack and nada. Booo. I am trying to fit in walking when I can but I know what I need is some real aerobic exercise. And I know if you burn energy it makes more energy but tell my lazy bottom that. 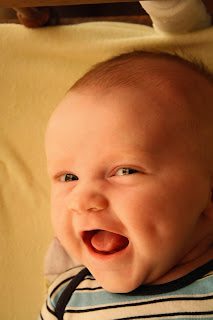 There he is. Crowley boy #3. And yes that basically is a picture of his dimple. His asymetrical dimple. He's very cute huh? Can't believe it's been about 4 months since I was on here with an update. Scratch that, I can.
So here's the story of Noel. I went into labor at about 7:00 on March 31. We got to the hospital at 10, he was born at 12:30 AM. April 1. The Fool's Day, to his father's chagrin. While we were at home I had some denial about being in labor. But John convinced me we had to go to the hospital - by the time we got there, I couldn't even really walk. I was almost crying. I never had that experience with the first two because I was induced with Cian (epidural at 4 cm) and got the epidural at 5 cm with Paudie. I was at 6 cm when we got to the hospital and about 8 when I finally was able to get the meds. They weren't on board very long when it was time to push. He was out in no time at all. What I remember is that no one (there were only 4 people in the room) would say what the gender was. "Oh this baby has a lot of hair" "Oh my, what a long baby!" Finally I asked and was told, another boy. Which I had expected and is perfectly fine. We are so well equipped for boys!
Paudie had a hard time adjusting to big brotherhood. I'm not going to lie, it was so brutal. He was a total brat. When have I ever said that about him? He seems to have settled in some. But the first few days were a disaster.
So what can I tell you about Noel? Well, he is the sweetest baby like ever. He never cries. Only when he is uber hungry. He is low key and super smiley. He is enormous. Top of growth charts for height and weight. Has Cian's big blue eyes. Acutaally he looked a lot like Cian at first and now is more of a fat, blue eyed Paudie. But he def has Cian's personality. All party all the time.
Sleeping was rough at first but in the last week or so (he just turned 3 months) he has started doing 7-9 hour stretches at night. Hallelujah! Just in time for me to go back to work. John is home with him for the next few months till we figure out where we can get some infant care from. Easier said than done.
I still have a lot of panic about pediatric cancer. Hate it. Hate that I just can't be 100 percent confident and happy. Especially because Noel is so Cian like. But I am getting by. Denial perhaps.
Funny how having a baby makes you see your other children. If Paudie was 2 going on 5 before, now it's like 2 going on 10. He is riding a bike, feeding the dog, letting him in... if only he could use a toilet - that is our summer project.
So there you have it. 5 years in the making, we now have two living children. Who would have thought it would take so long. Me, bitter? Why yes. :)
Posted by paudie's ma at 1:28 PM No comments: