Yes, Paudie was baptized this past weekend. Welcomed into the Catholic Church, all traces of original sin banished from his little body. It all turned out to be more enjoyable than I expected. It was a small gathering, 3 kids in total, with a deacon doing the honors. Guess when you come from a different parish you don't qualify for a bona fide priest. Still the guy was genuine, nice... a little too jokey but there are worse things. As per usual, Paudie was his ridiculously cute rock star self, flirting and smiling.

How can such a happy child come from such a glass-half-empty sorta ma. Must be the paternal genes.

Meanwhile I continue to carry around an extra 10 pounds that may just become a permanent fixture on my body. It's so hard to lose baby weight! And pretty damn unfair. I don't know when I am going to find time or willpower to exercise and stop eating sugar. I think I still feel sorry for myself and thus have this belief system that I deserve what I want. I am actually considering like Jenny Craig because if the food was in front of me, that would help half the situation. Maybe I should just come to terms with the fact that my body will never truly be the same. Wah. Or I could just get pregnant again. That actually feels like the easiest solution. That's probably why that wacky family has 16 kids, cos the mom didn't want to deal with losing baby weight.
Posted by paudie's ma at 3:47 PM No comments:

I claim this mouth in the name of incisor! 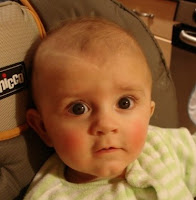 Every night Paudie gets really pink cheeks. We're not sure if it's teething or he's just warm or what it is but it's pretty damn cute if you ask me. Between the cheeks and the crazy long lashes, he's pretty glamorous.

Given Paudie's proclivity towards wanting to chew, clearly his gums must be sore. The other night he was crying and miserable and making odd faces that we interpreted as gum pain so we busted out the baby orajel and within seconds of me applying the smallest amount he fell sleep. Must be good stuff. Like I always say... better living through chemistry.

In other Paudie news, he had a decent bath Saturday because he was scheduled to have his photo taken Sunday. The photog cancelled due to illness and the first thing we thoughts was, damn, what a waste of a bath. I know, babies are supposed to love baths and get all sleepy etc. Paudie tolerates his baths and that's about as far as it goes. And I can't say I blame him. It's humiliating having to bathe in the kitchen sink. The hardest thing about giving him a bath is getting under the fat rolls of his neck and armpits and into the palms of his hands. You wouldn't believe what accumulates in those places. The other day I pried open his fist and there was a little plastic piece stuck in there, the kind used to adhere price tags to clothes.

The raspberries are still a big hit and the child still refuses to roll-over. I am trying not to worry about him missing that milestone for 4 months. I look at it like... it's not that he can't roll-over, he just has no interest. I don't think he yet understands the purpose it would serve. He's quite happy being able to see everything that is going on even if that means a slightly mis-shapen head from spending all his time laying on it. We try to work with him to accomplish the roll-over and if anyone were to hear the goings on, they would think we were training a dog.

Paudie gets baptized this weekend. We'll see if I hold it together. I know I will have flashbacks to our first son's funeral, which I don't remember much about since I was so deep in thought about his baptism which had been held at the same church only 6 months earlier. All I kept thinking about was how on that day, with all the 'welcoming' rhetoric, I assumed my son's life would be measured in decades, not months.

Some days I think... clearly we were chosen to be made an example of. I don't even bother with the 'why' anymore. I just try and accept it as fact.

Paudie started on solid food this week. The term solid is actually a bit of a misnomer since his rice cereal resembles a drink, one that would be much more efficiently ingested via a straw than a tiny spoon. But the experts say that in the beginning, it's all about the eating experience for a baby and not so much actual digestion. Because he actually isn't digesting his cereal. Because it is hard to digest food that is smeared on your face, hands, bib, high chair and so on. All in all he seems to really dig the experience - sitting up high and straight, the attention, the ridiculous voices and noises we employ to try to get him to open his mouth.

In other firsts... Paudie has been spending considerable time trying to make the raspberry noise. He gets rather hung up on it at certain times. I think it's extremely cute, his eagerness to perfect the raspberry. I hope to capture it on tape and post. We've also managed to figure out how to make him giggle this hearty, joyous giggle that is just too damn precious for words. Everytime we try to tape it he's all, nah. No giggle for you. Maybe later. I'll let y'all know.

Now for a little introspection.

I'd like to say I'm only 35, but I don't think the word 'only' really works that well in front of my age anymore. So I'll just say I'm 35, dammit. I'm 35 and feeling totally lost beyond my role as Paudie's ma. I find myself wondering - what the hell am I doing - at least hourly since I returned back to work. Yesterday I learned that Dr. Judah Folkman died - he was a prominant cancer researcher at Children's Hospital Boston where our son was treated for his cancer. I never met the good doctor, but was made aware of his work from other NB (neureoblastoma) families. He had taken an interest in NB and thought his work, something called angiogenesis, could play a major role in treating children with the horrid disease. He was once referred to as the man that just might cure cancer. Pretty amazing stuff he did - think of the legacy he is leaving, the impact, the inspiration. It all just makes me think - again - what am I doing? Shouldn't I be doing something that matters or something that I really love - at least one or the other. Instead I'm stuck in between. (insert raspberry wav file).

Some days I feel that my perspective as a bereaved parent has paralyzed me and not had the motivating effect that so many life changing events seemingly can. Perhaps it is something that will come with time.
Posted by paudie's ma at 12:03 PM No comments:

The Cost of Admission 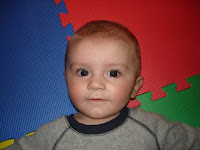 I know, every parent thinks their children are the best, the brightest, and just all around totally awesome. But most parents don't have the experience of leaving a child behind in a hospital morgue and that is what I think sets my husband and I apart from most parents. Our adoration of this child is immeasurable. When we go to bed at night we silently think, "I hope he's here in the morning." When we wake up and he greets us we silently think, "High five." I'm not trying to make light of losing a child, I'm trying to relay what goes through the minds of bereaved parents because I think to most others, it's this total mystery that is better not explored.

Shortly after losing our son, the champion race horse Barbaro was euthanized. During the press conference announcing his death his owner said, "Grief is the price we all pay for love." So true. So unbeliveably true. Having our first child opened our eyes to a whole new world of devotion - the cliched level of love that no one knows is even possible until the bith of a first child. The decision to get pregnant again was simultaneously easy and agonizing - to have experienced the highest high and the lowest low, and to know that another baby could lift us back up - all tempered by the fear of 'what if' - what if we lost another. My mind can't even process the thought.

Paudie arrived in September, eleven months after his brother died, 18 months to the day that his brother was born. I can honestly say having him saved us. He's the reason I smile, eat, shower, pay bills, leave the house. You name it.

But he doesn't fix everything nor would I expect him to. He just makes it all infinitely better.
Posted by paudie's ma at 1:48 PM No comments:

hello? is this thing on??

yeah i'm blogging. i've got some perspective i thought someone might be trying to hear.

cos i was a mom.
then i wasn't a mom anymore.
but now i'm a mom again.

the paudie chronicles is about our baby, paudie. it might end up being a study in minutia and that's okay. cos paudie is the most fascinating person i know - and he's only four months old. he's the reason i'm typing this and not rocking the fetal position in a dark room.

we lost our first son at 7 months of age to cancer. (yes, babies get cancer.)

but the joy he brought us in those 7 months far outweighed the pain of his diagnosis, treatment and death, which all happened in only a 7 week period. the pain was significant. ridiculous. so that just tells you the extent of the joy he was responsible for. which is why we tried again.

so this blog is about motherhood (parenthood if my husband wants to get in on it), take 2.
Posted by paudie's ma at 12:58 PM No comments: